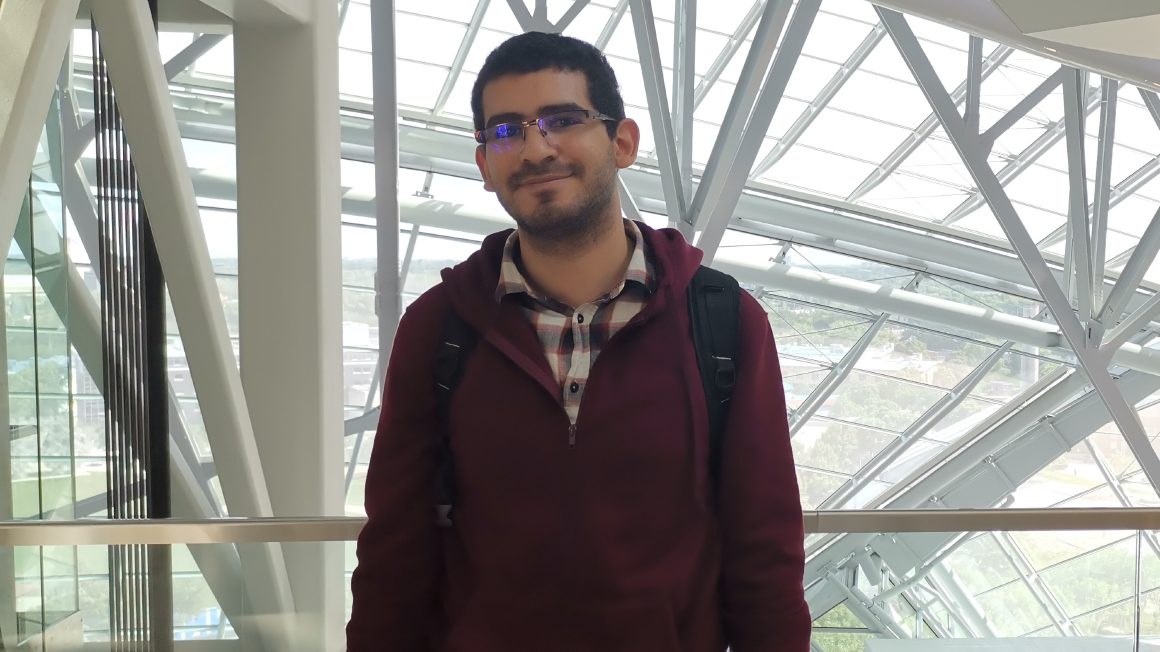 As he approached the end of his studies at Ecole Polytechnique de Tunisie of the University of Carthage, Habib Ben Abdallah began considering his options for fulfilling his graduation internship requirement.

Studying to become a polytechnic engineer, and as a passionate researcher with a keen interest in music theory and fondness for math and computer science, one of the opportunities available through the Mitacs Globalinks Research Initiative that most piqued his interest was University of Winnipeg Associate Professor Dr. Christopher Henry’s research into automatic lyrical-style imitation.

“(It) was a project that could enable people who have an inability to sing, so the objective was to create an algorithm that could enable them to imitate the style of professional singers,” Ben Abdallah said, explaining the technology could help those who’ve undergone procedures such as a laryngectomy. “What they do is record their voice and choose a song and the algorithm would make their voice sing into the style of the professional singer they selected.”

Arriving at UWinnipeg in May 2018, what Ben Abdallah experienced alongside Henry was engaging research and encouragement the likes of which he hadn’t prior.

Both left a lasting impression on him, who likewise made such an impression on his mentor he was encouraged by Henry to apply to the Master of Science in Applied Computer Science and Society program. Whether in the thesis- or course-based program, it would give him the opportunity to work within a wide array of research interests, including, but not limited to, computational intelligence, data warehousing, granular computing, software engineering, security and privacy, multimedia computing, and wireless communication.

It wasn’t a difficult decision. Not long after he had returned home to Tunisia and completed his degree, Ben Abdallah applied and was accepted to the program under the supervision of Dr. Henry and, soon after, by Dr. Sheela Ramanna. Their combined expertise in high-performance computing and machine learning was the right background to help guide Ben Abdallah to reach his full potential.

A supervisor should be very open to ideas, and that’s what happened here at The University of Winnipeg.

Having spent the time between his graduation and return to UWinnipeg in a research post in Qatar, Ben Abdallah knew what he wanted out of his studies. He discovered in his time spent abroad a desire for more research independence and felt joining UWinnipeg’s program would give him the opportunity to be given such freedom. It helped, of course, that Henry saw his role as supervisor in exactly that light.

“We help the student avoid pitfalls and dead ends, help them explore the relevant literature, setup their experiments, analyze their results, and, ultimately, write their thesis,” said Henry. “However, all this work is driven by the student, and we are there as mentors pointing the student in the right direction.”

To that end, Ben Abdallah has been supported in his current endeavour: exploring and creating new mathematical models for neural networks, work which can have an impact in a broad range of fields. His research focuses on increasing the efficiency with which the networks are created and trained. It’s work with near endless possibilities, capable of doing anything from improving facial recognition technology to disease detection in crops, an important agricultural application.

“Another application could be in medical imaging, the diagnosis of diseases, such as myocardial infarction, which has to be detected early on and is sometimes undetectable by professional medical staff,” Ben Abdallah said. “This model can help them to create an early detection model for this infarction and can help save lives in the future. There are so many other applications that either are vital or are for the comfort of human beings.”

There’s been more to Ben Abdallah’s experience at UWinnipeg than his research alongside Henry, however. In fact, among his highlights has been the opportunity to expand his support network and submit a publication. Ramanna’s encouragement following a project on which Ben Abdallah had worked is what led to the eventual publication of 1-Dimensional polynomial neural networks for audio signal related problems.

The efforts of Henry and Ramanna have created a somewhat symbiotic relationship, too, as working with graduate students such as Ben Abdallah has impacted their own work.

“By supervising graduate students from diverse countries and cultures in my research group, I have learnt to calibrate research problems and solutions to match their abilities,” Ramanna said. “Also, successful training of several graduate students has resulted in better and more interesting outcomes in my own research.”

As he continues his research, and dreams one day of working on his own independent research in the field of psychoacoustics, Ben Abdallah is thankful for what he has found in Henry and Ramanna.

“When (a supervisor) leads you towards their own ideas, they will restrict you, they will not make you work better, and they may not accept variations of ideas or other approaches,” he said. “That will restrict you as a student and you will not be efficient at all. A supervisor should be very open to ideas, and that’s what happened here at The University of Winnipeg.”

Applications for the Winter 2022 Master of Science in Applied Computer Science and Society intake are open until July 1, 2021.

For more information about the Department of Applied Computer Science, please visit the departmental website or contact Dr. Christopher Henry by email at: ch.henry@uwinnipeg.ca