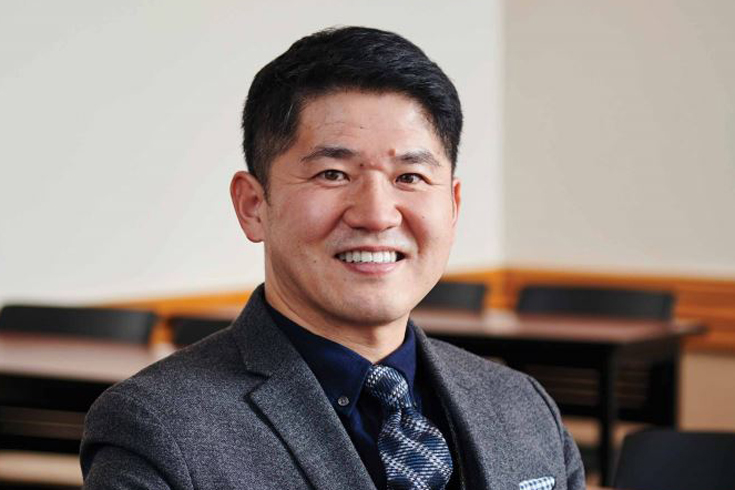 Hiroki Nakajima turned his UWinnipeg study experience into a successful business that has inspired more than 10,000 students to study English in Canada before launching careers in Japan. (Photo credit: David Lipnowski)

Hiroki Nakajima has a unique connection to Winnipeg. He arrived in 1998 to improve his English skills in The University of Winnipeg’s English Language Program (ELP), and has returned annually ever since. Over the past 20 years, he has inspired more than 10,000 students to study English in Canada before launching careers in Japan.

The necessity of understanding different cultures and acquiring English has increased dramatically over the past two decades.

Nakajima remembers arriving in Winnipeg from Osaka; a city of more than two million people spread across 221 square kilometres, and marveling at “the great plains of Winnipeg, the horizon that endlessly continues, the wide sky, the rich natural environment…”

It was the polar opposite of where he came from, but Nakajima felt an immediate connection.

“It felt like home, even in the beginning. I found everything important in my life here in Winnipeg.”

He met his wife on the first day of class. From different sides of Japan, they may not have crossed paths if they hadn’t both studied in Canada.

Nakajima’s experience was life-changing and he wanted to share it with others. His UWinnipeg ELP director encouraged him to launch his own educational consultant company.

He returned to Japan and opened Wild Rover Enterprises, naming his company after the ship that carried one of the first Japanese international students, Shimeta (Joe) Niijima, to North America. Niijima went on to found Doshisha University, one of Japan’s oldest and most prestigious schools. It was there that Nakajima received his business degree.

Just as Nakajima was inspired by Niijima, he inspires a new generation of students. His company recently celebrated its 20 year anniversary, growing from a home-based start-up with nine square metres and an old-fashioned IBM, to a successful agency with partner offices in Vancouver and Toronto.

“Wild Rover has one of the best quality networks I know of in Japan,” said Carmelle Mulaire, the current director of UWinnipeg’s English Language Program. “They are connected to all the top schools.”

Mulaire didn’t know Nakajima when he was a student, but has gotten to know him well in the past few years. She is extremely proud of his success.

“He’s developed a longstanding, rich relationship with our University and sends us strong students who fit in well, work hard, and are very engaged and active in the community,” she said.

One of those students is Yumeno Horikawa. In order for her to complete her degree, her university required her to study abroad for one year. As she had never travelled to Canada before, she was thankful for Wild Rover’s support.

“They helped me apply, get a visa, and make travel arrangements,” she said. “It made it a lot easier for me to come here to study.”

UWinnipeg’s English Language Program welcomes over 800 students from more than 76 countries each year, including 170 from Wild Rover.

“Studying abroad is a way for Japanese students to broaden their career possibilities and enrich their lives,” said Nakajima. “The necessity of understanding different cultures and acquiring English has increased dramatically over the past two decades. It’s very satisfying to see the difference this makes in people’s lives.”

UWinnipeg’s English Language Program (ELP) delivers high-quality programming to international and domestic students seeking to enhance their English proficiency. ELP offers a certificate program for those seeking to teach English as an additional language to adults, as well as customized programming and private tutorials — including communication coaching and workplace communication skills enhancement for internationally-educated professionals.

Read this article in the Spring 2019 edition of UWinnipeg magazine.