This article by Naniece Ibrahim (with files from Jennifer Gibson), originally published in the commemorative 2017 UWinnipeg Magazine. 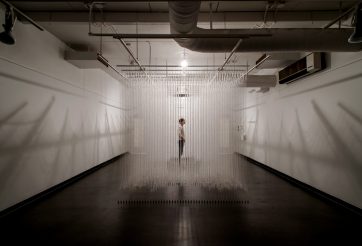 Fine art objects have been acquired by The University of Winnipeg and its founding colleges for more than 100 years — beginning with commissioned portraits of campus administrators, and continuing with donations from faculty, staff, alumni, and friends of the University (as well as from prominent artists themselves).

When UWinnipeg received its charter in 1967, the University administration was inspired to consider expanding the fine art holdings on campus. Tentative steps were taken at first: UWinnipeg’s first president, Dr. Wilfred Cornett Lockhart, obtained a few works by Manitoba artists during his term.

In 1978, UWinnipeg’s second president, Dr. Henry E. Duckworth, recognized the importance of carefully developing an art collection and announced the appointment of Patricia E. Bovey (then with The Winnipeg Art Gallery) as the University’s first art curator. Bovey was also a sessional instructor in the University’s History of Art program during this time. Although her position was part-time and her contract short, she accomplished a great deal for the University’s art collection.

Bovey was followed by Susan Moffatt, a graduate who carried out collections management duties on an interim basis. Shortly thereafter, independent curator Martha Cooke was employed for five years, when she conducted research on artists represented in the collection.

In the spring of 1986, University Vice-President Academic Dr. Ross McCormack appointed History of Art faculty member Dr. Sarah McKinnon as the new art curator, a position she held until she left Winnipeg in 2001. McKinnon oversaw the renovation of a former classroom located in the heart of campus to its current incarnation as Gallery 1C03. She also grew the University’s fine art collection: during her 15-year tenure as curator, the number of core works in the University’s art collection tripled.

Since it opened in the autumn of 1986, Gallery 1C03 has presented more than 130 exhibitions that have been seen by nearly 150,000 visitors. Gallery programming has featured diverse media by local, national, and international artists. Exhibits have intersected with various programs of study at the University, thereby providing the campus and local community with opportunities to learn about visual art.

Today, The University of Winnipeg holds more than 1,000 artworks, with a core collection of approximately 550 pieces. The collections mandate has remained consistent with the goals established by former curators Bovey and McKinnon: the acquisition of 20th century and contemporary art by established Manitoba artists.