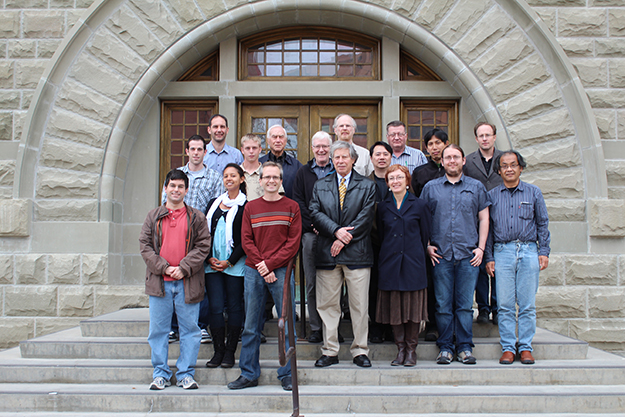 Photo of Canadian physicists at UWinnipeg

WINNIPEG, MB –The University of Winnipeg is hosting a meeting of Canadian physicists who are working towards a new kind of neutron source. When completed in 2016, the Canadian Spallation Ultracold Neutron Source will be the world’s highest-density source of ultracold neutrons. The host site for the experiment is TRIUMF, Canada’s National Laboratory for Particle and Nuclear Physics, in Vancouver.

“The fact that people from around the country are gathering at our University demonstrates our leadership in this exciting new field in fundamental physics,” explained Dr. Jeff Martin, Associate Professor of Physics and Canada Research Chair in Fundamental Symmetries in Subatomic Physics at UWinnipeg. “We hope to create our plan for the next several years of construction and operation, which will lead to a new world-leading neutron facility in Canada.”

Martin leads an international collaboration with representation from Canada, Japan and the United States. The Canadian institutions involved are: The University of Winnipeg, University of Manitoba, University of Northern British Columbia, and TRIUMF.

Martin’s team plans to conduct the best ever measurement of the neutron electric dipole moment (nEDM), a measure for the distribution of positive and negative charge inside the neutron. The
measurement could revolutionize understanding of the connection between particle physics and the origin of matter in the universe.