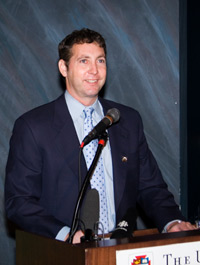 Leonard Asper, President and CEO of CanWest Global Communications Corp., announced a corporate gift of $3 million to The University of Winnipeg to establish the CanWest Centre for Theatre & Film at a media conference December 12, 2006. This extraordinary gift will further enhance the national prominence of The University of Winnipeg’s highly-regarded Department of Theatre & Film and affirm its reputation as a centre of excellence in theatre and film studies in Canada.

“We’re pleased to be part of the dynamic development and growth underway at The University of Winnipeg and in downtown Winnipeg,” said Asper. “The theatre and film graduates make a significant contribution to the Canadian theatre and television scene and we rely on their skills to help our company grow. The vision, commitment to excellence and talent pool in The University of Winnipeg’s theatre and film studies therefore appealed to us both as corporate citizens and investors. Support for the performing arts and for post secondary education are two of CanWest’s designated areas of community investment and we are proud to be part of this project.”