Exciting Book Launch at Wii Chiiwaakanak where Book Was Born 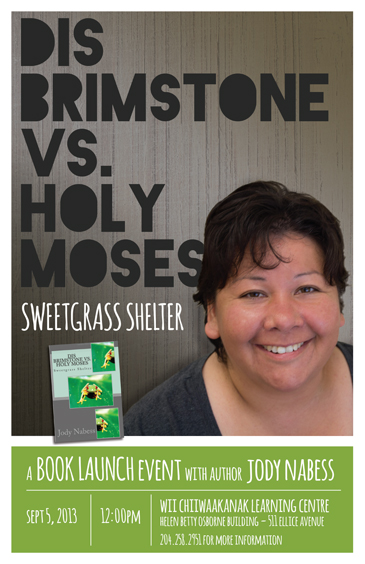 WINNIPEG, MB – University of Winnipeg student Jody Nabess has self published the book Dis Brimstone vs. Holy Moses,  which will be launched on Thursday, September 5, 2013 at 12:00 pm at UWinnipeg’s Wii Chiiwaakanak Learning Centre, where it was written in its entirety.

“Without this important community resource, my book would have taken a lot longer to complete,” expressed Nabess. “I am thankful for the generosity of the Wii Chiiwaakanak Learning Centre and its staff.”

Nabess’ ideas for Dis Brimstone vs. Holy Moses began at UWinnipeg in late 2012 at the Aboriginal Student Centre. The story crystallized in April 2013 when she began writing at the Wii Chiiwaakanak Learning Centre where she went regularly until she completed the book.

Dis Brimstone vs. Holy Moses is influenced by her life experiences and the current Canadian political landscape. This engaging human story tackles issues on Aboriginal housing, politics on the reserve and racism.

The main character, Faye Fortinbras, who shares Nabess’s middle name, is on a quest to help her community members find appropriate housing. The rebellious Faye goes above and beyond the call of duty to get her voice heard at her band council meeting. Will she succeed? Will her friends remain supportive until the end? Find out by purchasing the book on line at Amazon.com.

Biography
Jody Nabess grew up in The Pas, MB, on the Metis side of town (known as Umpherville) with her foster mother, Eva Sinclair. Sinclair took Nabess from a police woman’s arms in 1974. Nabess grew up in the Sinclair home, where they spoke the Cree language from the Moose Lake dialect.

Over the years Nabess faced many challenges, including living on the street, but always knew she wanted to pursue an education. Nabess completed her Grade 12 at the Aboriginal Community Campus, and in 2012 was admitted to The University of Winnipeg.

The Wii Chiiwaakanak Learning Centre is a community partnership initiative that provides educational and capacity building opportunities. It is designed to reflect our neighbours’ needs for an educational gathering place that is inclusive and accessible. The centre is open during the day, evening and Saturday and provides the community with free and open access to the RBC Community Learning Commons, the North West Company Heritage room, community meeting spaces, after school education programs, learning, and cultural programs.