IUS Map of the Month: At-risk trees in Winnipeg 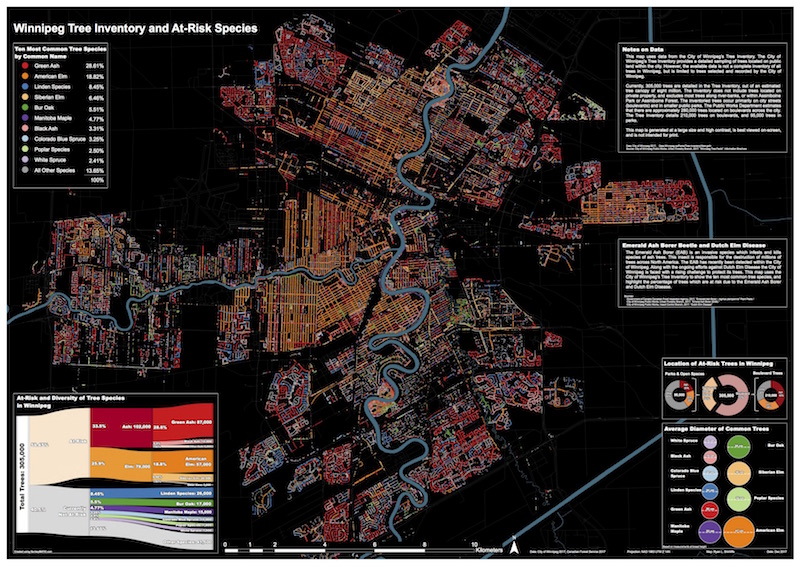 Earlier this year, UWinnipeg’s Institute of Urban Studies (IUS) started a rotating Map of the Month web feature that turns large amounts of data into accessible visuals. These maps are created from publicly available data and are intended for public use and information.

By not including significant commentary, maps such as Winnipeg’s Year of Construction or Parking Citation Density take less than a week to produce. This also allows timely response to current events, as is the case with the map above of Winnipeg’s Tree Inventory and At-Risk Species. This week news broke that the emerald ash borer beetle had landed in Winnipeg, putting the city’s ash tree population in jeopardy.

Typically, the maps are generated at a large size and high contrast best viewed on-screen, and are not intended for print.

Click here to check out the IUS Map of the Month and see the ring-growth of the city, or where the hot-spots for parking tickets are!

About the Institute of Urban Studies

The Institute of Urban Studies is an independent research arm of The University of Winnipeg that explores urban issues in a broad, non-partisan manner. The Institute focuses on inner-city, housing, Indigenous, and urban development issues; and frequently partners with government, the private sector, and community-based organizations. Current projects include developing supports for non-profit houses as federal funding comes to an end; assisting in the upcoming 2018 Street Census of persons homeless; and conducting an in-depth examination of the Winnipeg condominium market.