Hear From The Legends And The Rising Stars Of Indigenous Cinema 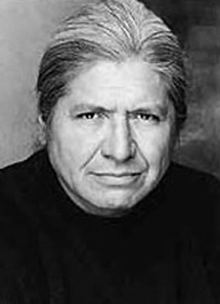 Actor Gordon Tootoosis
WINNIPEG, MB – The Winnipeg Aboriginal Film Festival is bringing some of the festival to you this Thursday, November 19 via live webcast at http://www.uwinnipeg.tv/live.

Come here from the legends and the rising stars of Indigenous cinema:

7:00 PM – APTN’S Cheryl MacKenzie interviews renowned actor Gordon Tootoosis. Originally from the Poundmaker Reserve in Saskatchewan, Gordon Tootoosis has appeared in over 80 film and television projects, including the Hollywood Blockbuster “Legends of the Fall” and the popular television series “North of 60.” Tootoosis stars in several films at the 2009 WAFF. He plays an Ojibwe elder in “Juliana and the Medicine Fish” by local director Jeremy Torrie (MANITOBA FILMMAKERS’ NIGHT, 7-9 PM, Thursday Nov 19). Tootoosis plays a leading role in APTN’S controversial new dramatic pilot BLACKSTONE that makes its Canadian debut at the festival. (5 PM Saturday Nov. 21), BLACKSTONE is a raw, uncut look behind the veil of power and politics on a corrupt Indian Reserve. Gordon Tootoosis is a voice on the popular animated APTN hit “Wapos Bay” 1 PM Saturday Nov 21.

8:00 PM – Filmmaker and WAFF Festival Director Coleen Rajotte interviews Misty Upham of ‘FROZEN RIVER.” In this dramatic feature, two single mothers living on a small Mohawk community near the Canada-USA border are drawn into the world of cross-border smuggling. Misty Upham literally went from working at a laundromat to walking the red carpet with the release of this incredible film that was nominated for 2 Oscars. Find out how Misty was discovered for this role, how she prepared to play it, and how her life has changed since making this movie.

9:00 PM – Filmmaker Willis Petti interviews the cast and crew of “RUN” – the feature drama debut of director Tom Simes. RUN is the story of a Metis girl with a chip on her shoulder who discovers a family secret while spending the summer at her Cree grandfather’s reserve. This extaordinary movie was made on a shoestring budget. How did they do it? (RUN makes its world premiere at WAFF 7 PM Friday November 20 Garrick Event Centre, 330 Garry St)