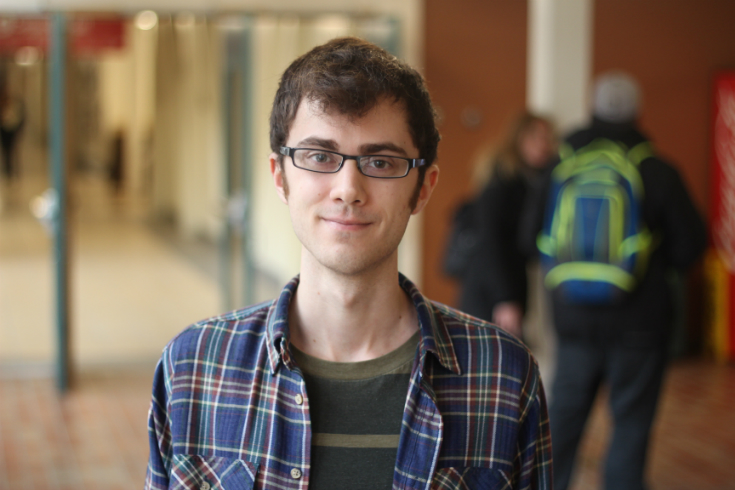 Fourth year student Mathieu Paillé is the winner of the Dr. and Mrs. Roderick Hunter Scholarship 2015. Paillé is completing a double-honours Bachelor of Arts, with majors in linguistics and a student-designed combination of Indigenous Studies and Anthropology. He is currently working with Dr. Nicole Rosen, a linguist at the University of Manitoba. He is researching young French-Immersion students’ vowels as well as dialects of Canadian Prairie French.

“I’d like to become a linguist, probably specializing in Algonquian or Pano-Tacanan languages,” said Paillé. Pano-Tacanan languages are spoken in the Peruvian and Bolivian Amazon. “There are good programs in South America where linguists work with communities to document their languages. This can be useful in terms of passing the languages on to the next generations, and it also increases linguists’ understanding of what forms can occur in human language.”

For his  PhD, he said he would like to do fieldwork in a Pano-Tacanan community, “This would provide considerable support for the speakers in terms of language preservation, both because it would facilitate teaching the language and ‘validate’ the language as being worthy of interest. I have also been studying Ojibwe on my own time, so that I may contribute to language survival here at home.”

Paillé uses his free time to contribute to his university community as an activist on campus. He is a key member and organizer of Fun Class, which is involved with various social justice initiatives working on creating a directly democratic space on campus where students can organize themselves in a face-to-face setting.

“I really like it here (at UWinnipeg),” said Paillé. “I like the community and the downtown location.”

The Dr. and Mrs. Roderick Hunter Scholarship was established in memory of Dr. R.O.A. Hunter, Third Chancellor of The University of Winnipeg, and his wife, Doris Hunter. It is awarded to a continuing, undergraduate student with high academic standing, outstanding leadership qualities, and significant extracurricular involvement on campus and is valued at $7,500.