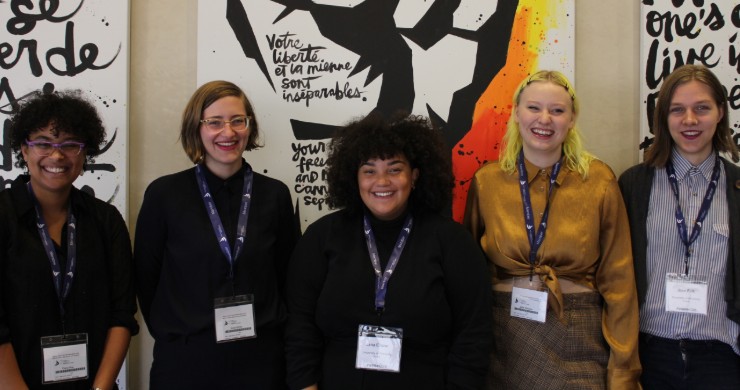 Museum Queeries is a collaborative research project based at The University of Winnipeg that prioritizes Indigenous Two-Spirit, lesbian, gay, bisexual, transgender, transsexual, and queer (2S+LGBTTQ) contributions and interventions into museums and museum studies.

The project is co-led by Drs. Angela Failler (women’s and gender studies) and Heather Milne (English), and is nested within a broader international partnership called Thinking Through the Museum.

Museum Queeries addresses structural exclusions and opens new modes of productive inquiry and activism. Failler clarifies, “the idea of ‘queer(y)ing the museum’ in this case is not only concerned with representations of gender and sexuality; it is also about challenging normative formations such as white privilege, racism, and settler colonialism, among other systems of oppression, as they operate alongside homophobia and transphobia in museum contexts. In other words, we use an intersectional approach to think through ways in which gender, sexuality, race, class, ability, religion, ethnicity, and national identities are inter-implicated in museum content and in visitors’ points of contact with the museum.”

Since Museum Queeries began in 2017, Failler and Milne have mentored 15 student research assistants (RAs) from the undergraduate to PhD level, including an international MITACS intern and two Indigenous Summer Scholars Program participants. The RAs have developed their own research questions by reviewing literature in the field, visiting museums and galleries, conducting oral history interviews, and participating in “curatorial dreaming” workshops.

Their research has been published in blog form and as “unauthorized museum audio guides,” and been presented on national and international stages, including the 2019 Sexual Studies Association meetings at the Congress of Social Sciences and Humanities at the University of British Columbia, and the 2018 Federation of International Human Rights Museums Conference hosted by the Canadian Museum for Human Rights. Some have also presented their work locally at UWinnipeg’s Pride Speaker Series.

Failler and Milne were invited this past year to talk about their project for a workshop hosted by Laboratorium Museum in Warsaw, Poland, and, more recently, for an online conference on Critical Visitorship organized by the Curating and Public Scholarship Lab (CaPSL) at Concordia University, QC.

On the significance of Museum Queeries for diverse audiences and contexts, Milne observes:

“This is a project that is important and relevant because museums are really only beginning to address issues around gender and sexuality, and they have a long way to go in terms of exploring these topics through an intersectional lens. Our project aims to open and extend conversations about how museums might better explore and represent the lives of LGBTQ2+ people.”

Going forward, Failler and Milne say that Museum Queeries have plans to formalize a research partnership with the Toronto-based organization ArQuives, which houses an unparalleled collection of materials documenting LGBTQ2+ lives and histories. In addition, they will continue to expand their network of researchers, community groups, artists, and curators towards making a difference in and beyond museum cultures.

To date, Failler and Milne have secured funding through the Social Sciences and Humanities Research Council of Canada (SSHRC), Research Manitoba, the Institute for Women’s and Gender Studies, UWinnipeg, and Failler’s Canada Research Chair to support the activities of Museum Queeries.