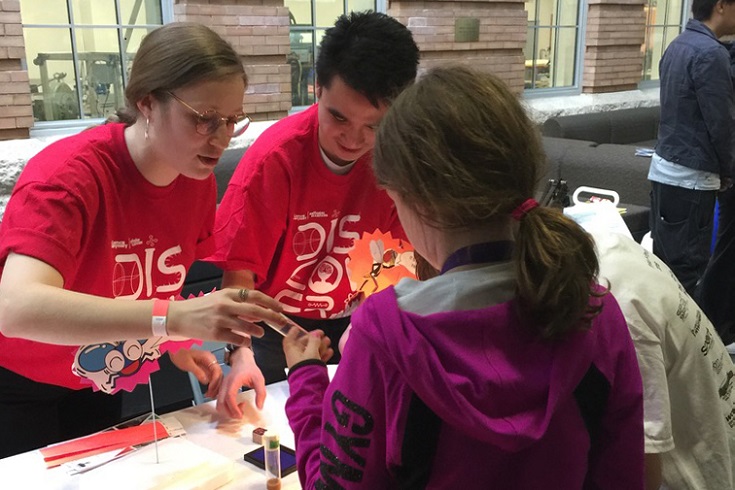 Time flies when you’re having fun, and for University of Winnipeg biology professor Dr. Alberto Civetta, fruit flies are a fun way to create a buzz about the importance of science research.

For the past five years, Civetta has taken a break from his UWinnipeg lab, where he researches evolutionary genetics, to volunteer at Science Rendezvous Winnipeg, hosting a fun, hands-on activity detecting mutants in fruit flies.

“I like to think of it as a ‘Where’s Waldo?’ game, where people are challenged to detect mutants that have different wing shapes or colours within a mixture of fruit flies that all look the same,” he said. “The game gives us an opportunity to introduce participants to the past and present value of using the common fruit fly, Drosophila, in genetics.”

Each year, Civetta invites a group of students from his lab to volunteer alongside him.

“They are the big engine,” he said. “I wouldn’t be able to do it without their involvement.”

“It’s a great opportunity to share some of what we do in the lab with the public, and to see things from a different perspective,” said Go. “It’s easy to get lost in the technicalities of lab work. Events like this focus on the fun side of science, a nice reminder of why I started a master’s degree!”

Civetta says Science Rendezvous is a great way to show the general public how fun science research is. He began volunteering after attending with his children. He was blown away by the energy of the festival, so when his colleague, UWinnipeg chemistry professor and Science Rendezvous board member, Dr. Tabitha Wood put a call out for volunteers the following year, he jumped on board.

The opportunity to engage the general public in science is extremely gratifying, and Civetta sees the impact first-hand in his own family.

“My daughter has developed an interest in science, and I like to believe that her attending Science Rendezvous had a role,” he said. “I believe it’s important to create incentives for kids, and particularly girls, involvement in science.”

He hopes his daughter and other youth attending the event are not only caught up in the wonder of science, but that it opens their eyes to future opportunities in STEM (science, technology, engineering, and math).

Civetta knew from a young age that he didn’t want a conventional career. An opportunity to work on a project involving population genetics during his undergrad sent him on the path toward becoming an evolutionary geneticist and university professor.

“Genetics caught my attention and everything unfolded from there,” he said. “I use genetics to address questions relating to evolution. Specifically, I work on genes that change rapidly, testing whether such changes might fuel biological diversity.”

A lot of the research he undertakes in the lab involves manipulating genes by inducing changes and asking how the gene change affected the organism, so while there may not be a direct connection, the activities he takes part in at Science Rendezvous are relevant.

Go says that showing non-scientists how to detect mutants in the common fruit fly is a fun way to get people excited about biology.

“Doing science outreach is a great way to connect with the public and show that the people underneath the lab coats can also have fun,” he said. “And who knows, we might just inspire the next Einstein!”

Science Rendezvous Winnipeg is the largest science and engineering festival in the province. It will be held at the University of Manitoba’s Fort Garry campus on Saturday, May 11, and is co-hosted by The University of Winnipeg and University of Manitoba. The Winnipeg event is part of a national celebration of science and discovery, and a signature partner of NSERC Science Odyssey (which runs May 4 to 19). Every year, more than 300 events take place in 30 cities, 10 provinces, and two territories across Canada.