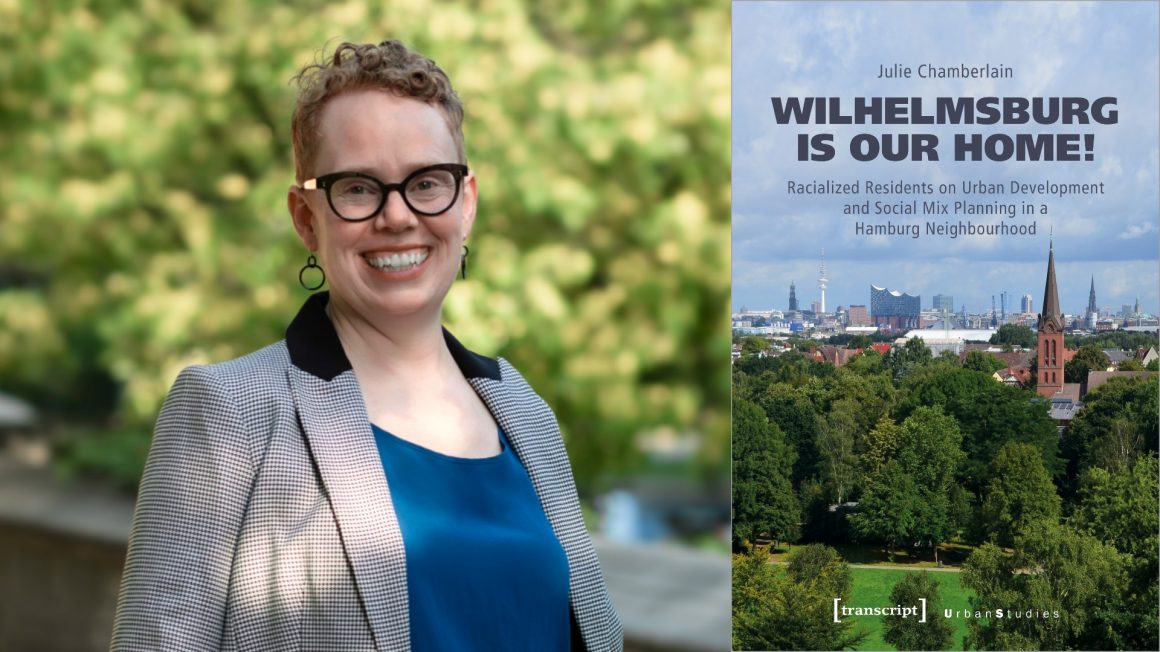 Dr. Julie Chamberlain and the cover of her new book.

Dr. Julie Chamberlain, Assistant Professor in the Department of Urban and Inner-City Studies, launched a new book, Wilhelmsburg is our home! Racialized Residents on Urban Development and Social Mix Planning in a Hamburg Neighbourhood. The book is one of the first of its kind to address the racialization of a German urban area.

Dr. Chamberlain’s history with the neighbourhood of Wilhelmsburg dates back to 2011 when she travelled to Hamburg on a graduate study tour. At that time, Wilhelmsburg received international attention for its intensive re-planning and development through IBA Hamburg, a German architecture and planning structure.

“The impetus for this research was a statement I heard from a local urban planner when I first visited Hamburg,” said Dr. Chamberlain. “The statement was: ‘to solve the problems facing the island neighbourhood of Hamburg-Wilhelmsburg, its population would have to be transformed.’”

Determined to challenge this unsettling notion, Dr. Chamberlain took the opportunity to focus her research on exploring who the population was imagined to be and how the public’s perception of Wilhelmsburg could be transformed through the perspectives of its racialized residents.

The PhD research quickly caught the attention of Transcript, a German academic publisher of cultural and social studies scholarship in German and English. They then transformed Dr. Chamberlain’s research into a book that contributes to the international scholarly debate and knowledge on the experiences of racialized residents in German neighbourhoods.

Dr. Chamberlain also mentions that the statement made by the local urban planner is not an uncommon view among some German residents.

“Black and People of Colour scholars and activists have argued for years for more attention to the experiences of racialized people and how racism shapes structures, institutions, and everyday life in urban centres in Germany,” said Dr. Chamberlain.

This book contributes to scholarly and activist conversations, closing the gap of research into how racial capitalism has shaped urban development, how racism is integrated into social mix policy, and the complex ways that city residents navigate and resist racialization to make welcoming neighbourhoods.

“I think for the citizens of Wilhelmsburg, this book paints a picture of the place that is more nuanced and complex than the dominant story that was told about it for many years,” said Dr. Chamberlain. “It captures a moment in time in a gentrification process that is well underway but not complete.”

If you would like to purchase Wilhelmsburg is our home! Racialized Residents on Urban Development and Social Mix Planning in Hamburg Neighbourhood, you can do so on the Transcript Publishing website and other bookseller websites.