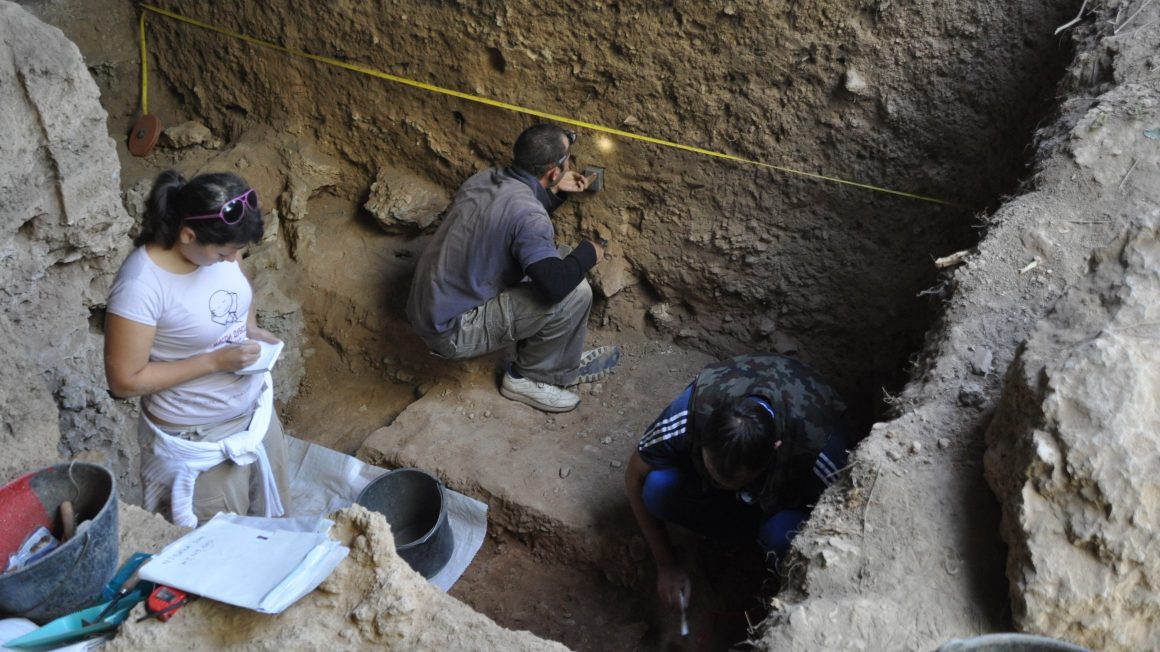 Students from the University of Belgrade and the University of Winnipeg excavating at the Neanderthal site of Pesturina cave (Serbia). Excavations uncovered a Neanderthal tooth and postcranial remains, and the tooth, dated to 100k is the oldest specimen that produced the oral microbiome in this study. Photo credit: Dušan Mihailović

University of Winnipeg professor Dr. Mirjana Roksandic’s analysis of the upper molar of the first Neanderthal to be discovered in Serbia has contributed to new research from the Max Planck Institute of Science and Human History, and unexpected clues about human evolution and health.

Early consumption of starches evidenced by dental plaque from Pešturina, where our team has been working since 2011, represents one of the most outstanding findings of this study as it counters the narratives of meat-eating Neanderthals.

A new study published in Proceedings of the National Academy of Sciences (PNAS) compares ancient dental calculus of humans, Neanderthals, and other primates. Despite oral microbiome differences, researchers identified ten core bacterial types maintained within the human lineage for over 40 million years.

In this study, a multidisciplinary international research team led by scientists at the Max Planck Institute for the Science of Human History (MPI-SHH) investigates the evolutionary history of the hominid oral microbiome by analyzing the fossilized dental plaque of humans and Neanderthals spanning the past 100,000 years and comparing it to those of wild chimpanzees, gorillas, and howler monkeys.

The team discovered a high degree of similarity between Neanderthals and humans, including an apparent Homo-specific acquisition of starch digestion capability in oral streptococci, suggesting that the bacteria adapted to a dietary change that occurred in a common ancestor.

Living in and on our bodies are trillions of microbial cells belonging to thousands of bacterial species — our microbiome. These microbes play key roles in human health, but little is known about their evolution.

Researchers from 41 institutions in 13 countries contributed to the study, making this the largest and most ambitious study of the ancient oral microbiome to date. Their analysis of dental calculus from more than 120 individuals representing key points in primate and human evolution has revealed surprising findings about early human behavior and novel insights into the evolution of the hominid microbiome.

The most challenging jigsaw puzzle in the world

Working with DNA tens or hundreds of thousands of years old is highly challenging, and like archaeologists reconstructing broken pots, archaeogeneticists also have to painstakingly piece together the broken fragments of ancient genomes in order to reconstruct a complete picture of the past.

For this study, researchers had to develop new tools and computational approaches to genetically analyze billions of DNA fragments and identify the long-dead bacterial communities preserved in archaeological dental calculus.

Using these new tools, researchers reconstructed the 100,000-year-old oral microbiome of a Neanderthal from Pešturina Cave in Serbia, the oldest oral microbiome successfully reconstructed to date by more than 50,000 years. This discovery was made as part of archaeological excavations of the Balanica, and Pešturina caves near Niš and part of a long-term collaboration between Roksandic and Professor Dušan Mihailović at the Univeristy of Belgrade.

“We were able to show that bacterial DNA from the oral microbiome preserves at least twice as long as previously thought,” said James Fellows Yates, lead author and doctoral candidate at the Max Planck Institute for the Science of Human History.

“The tools and techniques developed in this study open up new opportunities for answering fundamental questions in microbial archaeology, and will allow the broader exploration of the intimate relationship between humans and their microbiome,” he said.

Within the fossilized dental plaque, researchers identified ten groups of bacteria that have been members of the primate oral microbiome for over 40 million years and that are still shared between humans and their closest primate relatives. Many of these bacteria are known to have important beneficial functions in the mouth and may help promote healthy gums and teeth. A surprising number of these bacteria, however, are so understudied that they even lack species names.

“That many of the most important taxa are poorly characterized is a surprise to oral microbiologists who have been working on these bugs for years,” said Floyd Dewhirst, Senior Member of Staff at the Forsyth Institute and a coauthor on the study. “We’re still learning about new members of this community, and these results give us new species to target for full characterization.”

Although humans share many oral bacteria with other primates, the oral microbiomes of humans and Neanderthals are particularly similar. Nevertheless, there are a few small differences, mostly at the level of bacterial strains.

When the researchers took a closer look at these differences, they found that ancient humans living in Ice Age Europe shared some bacterial strains with Neanderthals. Because the oral microbiome is typically acquired in early childhood from caregivers, this sharing may reflect earlier human-Neanderthal pairings and child rearing, as has also been already indicated by the discovery of Neanderthal DNA in ancient and modern human genomes.

Researchers found that Neanderthal-like bacterial strains were no longer found in humans after ca. 14,000 years ago, a period during which there was substantial population turnover in Europe at the end of the last Ice Age.

“Oral bacteria provide an unexpected opportunity for reconstructing the interactions of humans and Neanderthals tens of thousands of years ago,” said Irina Velsko, postdoctoral researcher at the MPI-SHH and a coauthor on the study. “The intersection of human and microbial evolutionary biology is fascinating.”

An early love of starch

Among the biggest surprises was the discovery that a subgroup of Streptococcus bacteria present in both modern humans and Neanderthals appears to have specially adapted to consume starch early in Homo evolution. This suggests that starchy foods became important in the human diet long before the introduction of farming, and in fact even before the evolution of modern humans.

Starchy foods, such as roots, tubers, and seeds, are rich sources of energy, and previous studies have argued that a transition to eating starchy foods may have helped our ancestors to grow the large brains that characterize our species.

Roksandic considers this to be the most interesting finding of the study.

“Early consumption of starches evidenced by dental plaque from Pešturina, where our team has been working since 2011, represents one of the most outstanding findings of this study as it counters the narratives of meat-eating Neanderthals,” she said.

“Reconstructing what was on the menu for our most ancient ancestors is a difficult challenge, but our oral bacteria may hold important clues for understanding the early dietary shifts that have made us uniquely human,” said Christina Warinner, lead senior author of the study and a professor with joint appointments in Anthropology and Microbiome Sciences at Harvard University and the MPI-SHH. “Bacterial genomes evolve much more quickly than the human genome, making our microbiome a particularly sensitive indicator of major events in our distant and recent evolutionary past.”

It’s important food for thought — the humble bacterial plaques that grow on our teeth and that we carefully brush away every day hold remarkable clues not only to our health, but also to our evolution.