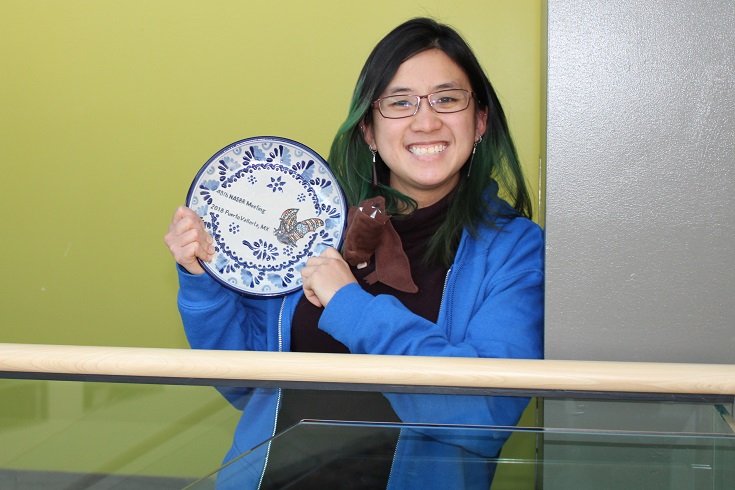 University of Winnipeg master’s student Nicole Dorville was recently honoured with a coveted student award for her presentation at the 2018 North American Society for Bat Research symposium in Puerto Vallarta, Mexico. The annual symposium brings together scientists, educators, and students to promote the study and conservation of bats.

It’s heartening to know there are multiple conservation management strategies being developed and our lab gets to test them out.

“Nicole gave a superb presentation and it was great to see her work recognized,” said Dr. Craig Willis, UWinnipeg biology professor and Dorville’s supervisor. “She has done really important research to understand the impacts of white-nose syndrome (WNS) on different species of bats and to test ideas about how we might mitigate impacts of this terrible disease for wildlife populations and ecosystems.”

Dorville is thrilled with the award, especially after experiencing a potential setback in her initial research.

“My research didn’t go as well as planned,” she said. “During my presentation, I joked about that. When I thought something didn’t go well, I still tried to work around it and get some data out of it to make lemons into lemonade. I hoped that other graduate students would empathize and learn to deal with such setbacks with similar levels of humour and creativity.”

Dorville’s research involved studying responses of big brown bats to the fungus causing WNS. Big brown bat populations have not declined with WNS like populations of some other bat species, so understanding what accounts for their success could be crucial to helping save other species endangered by the disease.

Early in her research, Dorville discovered some of the bats she’d been monitoring — which were supposed to be fungus free — were already infected when they arrived at the lab.

Refusing to give up, she continued monitoring the bats and discovered even big brown bats that were inadvertently infected with the fungus twice were still doing well at the end of the experiment. She was then able to use that data to help demonstrate the physiology underlying the big brown bats increased resistance to the disease compared to other species, findings that will be important for the conservation of endangered bats in Canada and the United States.

“It was nice to win the award because all of us in the lab put a lot of hard work into it,” said Dorville. “After my presentation, many other students and people I admired from afar, and never had the courage to speak to, were coming up to me to say that my presentation was really good, that it was both entertaining and scientifically sound. It was nice to receive that feedback.”

This was a great opportunity for Dorville to make professional connections before she graduates with a Master’s in Bioscience, Technology, and Public Policy in spring 2019. She will continue working in the UWinnipeg bat lab for the summer, but hasn’t made firm plans beyond that. She’s considering potential internships and contract jobs in South East Asia that would allow her to focus on her passion for disease ecology while travelling to “special places you couldn’t get to by yourself.”

Dorville hopes to eventually take on a PhD project that contributes to conservation — the same philosophy that led her to get involved in WNS research at UWinnipeg.

“I chose UWinnipeg because of Craig’s focus on conservation physiology. It was a cool project that lined up with my values,” she said. “For me, it’s about purpose. I believe that everything you do should be for the good of something. It’s heartening to know there are multiple conservation management strategies being developed and our lab gets to test them out.”