The Good Life, a documentary 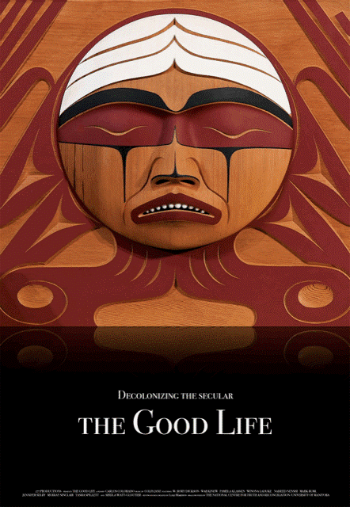 Original artwork ©Luke Marston, courtesy of the National Centre for Truth and Reconciliation/UManitoba.

UWinnipeg’s Dr. Carlos Colorado, Chair and Associate Professor of Religion and Culture, is screening a pre-release cut of his greatly anticipated film, The Good Life: Decolonizing the Secular on Monday, November 12, 2018 at 7:00 pm in Eckhardt-Gramatté Hall. It will be followed by a Q&A.

The film features interviews with leaders, activists, academics, and experts from the Indigenous and non-Indigenous community, including many University connections. UWinnipeg’s W. Rory Dickson and Mark Ruml; honorary alumnus Sheila Watt-Cloutier and Murray Sinclair; and alumna Jennifer Selby are all featured. Others interviewed include (in alphabetical order) Wab Kinew, Pamela Klassen, Winona LaDuke, Naheed Nenshi, and Tasha Spillett.  The film is free and open to the public.

“Through the many interviews that took place in the filming of this documentary, my team and I developed a very deep appreciation of the vital place of Indigenous spiritual practices in the essential work of Reconciliation,” said Colorado. “My hope is that the film enables me as a researcher to stand in solidarity to help defend ceremony and traditional knowledge as a core part of our shared public life. I am honoured to share it with my community.”

The Good Life is a feature-length documentary that explores the important role of Indigenous spirituality in Canadian public life and examines whether processes of reconciliation can be “secular” — an arrangement of power that often segregates spirituality and religion outside of public life. While Canada might be described as “secular,” many of the Calls to Action from the Truth and Reconciliation Commission (TRC) petition for an increased role for traditional teachings and spirituality in important public contexts. Many of the formal practices of the TRC themselves is centered on ceremonial aspects, such as the lighting of the sacred fire and the integration of the Seven Sacred Teachings.

Given this backdrop, the film engages a number of relevant interrelated questions: What is Canadian secularism and how does it delimit the role of spirituality and ceremony in public life? Do traditional Indigenous philosophies of the “good life” — such as the Anishinaabe notion of “Mino-Bimaadiziwin” — allow for a secular/sacred division? Is the expectation of such a division of life yet another iteration of colonialist structures of power? And if this is so, does secularity first need to be decolonized to allow for real reconciliation?

The screening is co-sponsored by the Department of Religion and Culture and the Centre for the Liberal Arts and Secular Society.