The passing of Dr. Marsha Hanen, past UWinnipeg President 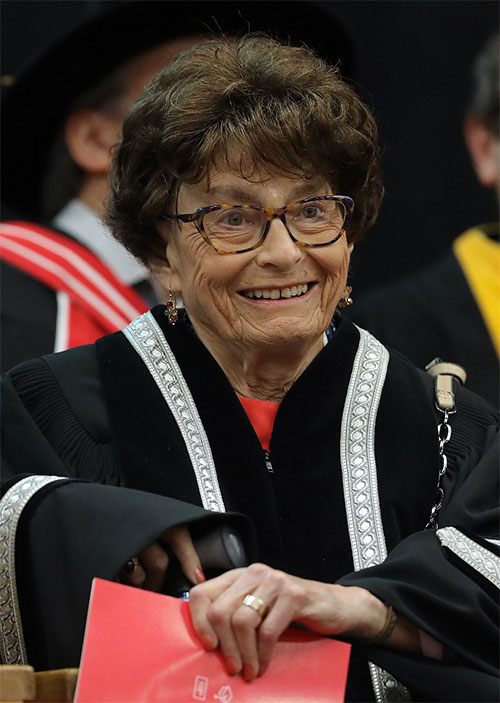 Dr. Hanen at The University of Winnipeg’s 113th Convocation Ceremonies in June 2018. Photo by Jason Halstead.

The UWinnipeg community is saddened by the passing of Dr. Marsha Hanen, who served as The University of Winnipeg’s President & Vice-Chancellor from 1989 – 1999. She passed away on Saturday, April 13 at her home in Victoria, BC.

A memorial and burial is planned for Thursday, April 18 in Victoria (click here for details and full obituary). The flags on UWinnipeg’s campus will be lowered in Hanen’s honour.

During her decade of service to UWinnipeg, Hanen advanced the institution’s growth and development strategy, bolstered the University’s reputation as a strong undergraduate school, and laid the groundwork for many campus landmarks. Some of her accomplishments include the signing of The University of Winnipeg Act, the establishment of a full Bachelor of Education program, and the opening of both the Bulman Student Centre and the acclaimed Eckhardt-Gramatté Hall.

She also initiated the process of closing Spence Street to vehicle traffic and secured the purchase of the former Salvation Army Citadel on Balmoral Street, which later became home to the University’s Department of Theatre and Film. Her vision and forethought have allowed UWinnipeg to grow and expand in the years since her tenure.

Former colleagues and faculty members describe her as an open and honest leader with a high level of integrity. She actively included the campus community in decision-making and worked to promote interdisciplinary collaboration among academic departments.

She gave back to the UWinnipeg community through The Marsha Hanen Global Ethics and Dialogue Fund, which supports faculty research; and the Marsha Hanen Award for Excellence in Creating Community Awareness, which recognizes faculty and staff working to expand understanding of, and respect for, UWinnipeg.

Hanen was the first female to lead The University of Winnipeg and was one of Canada’s first female university presidents. She was a member of the Order of Canada and an esteemed academic.

In June 2018, the University honoured Hanen  by renaming the Spence Street corridor “Marsha Hanen Way.”  Hanen’s daughter, Amy, noted “that honour, and revisiting the warmth of the community, was so meaningful for her and for us…we are so grateful that she had that opportunity to be recognized while she could still travel and experience it as she did.”