’Tis The Season For Giving To ‘Opportunity’ 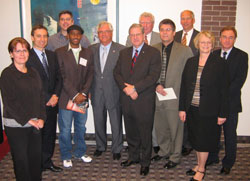 New Gifts
Aside from personal donations, a number of new gifts totaling $215,000 to the Opportunity Fund were announced, along with $30,000 in donations to the Duff Roblin Scholars Fund to support graduate students in Aboriginal Governance. The University intends to build a $10-million endowment fund for the Opportunity Fund education initiative.

“The Opportunity Fund is a unique initiative among Canadian universities,” said University President & Vice-Chancellor Lloyd Axworthy. “This fund will ensure that students – regardless of background and socio-economic status – have access to higher education.”

Two student speakers at the Opportunity Fund breakfast, Muuxi Adam and Glen Kowalchuk, drove this point home by thanking donors for their help and speaking about the vital importance of support from the Fund for people who, without this help, could not realize their dreams of a university education.

“Since announcing the Opportunity Fund, our generous alumni and friends have helped bring the fund to more than $1.64-million,” announced R.M. (Bob) Kozminski, Chair of ‘A World of Opportunity’ Capital Campaign, in thanking previous donors to the fund and announcing new contributions.

The following gifts were announced at the breakfast event:

Special Guests
Among the special guests at the breakfast were representatives from corporate donors who made gifts to the Fund in 2007: McLean Budden ($100,000), with Doug Andrews present; and Scotiabank ($150,000), with Susan Roberts and Steve Farkas attending.

“We are very grateful for the commitment by our donors to this important Fund,” said Susan Thompson, President and CEO of The University of Winnipeg Foundation. “We are making good progress working towards the overall goal of this fund – and our donor’s gifts are already at work, helping today’s students realize their potential in a way that simply wasn’t possible without the help available through the Opportunity Fund.”

For information or to give online to the Opportunity Fund, visit www.itsyouropportunitytoo.ca.