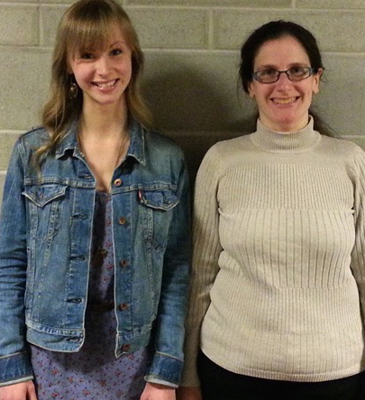 Close to 300,000 Canadians have Alzheimer’s disease and within a generation, dementia may affect more than one million people across the country. UWinnipeg student Heather Whittaker is in her third year of the Biopsychology program and is currently doing research on this disease that has a major impact on the health of Canadians.  Whittaker has been selected as one of ten finalists for the Sunnybrook Prize Competition for her summer research project that is worth $10,000. She presents in Toronto, ON, this  January 2015.

“I have a particular interest in the aging brain,” explained Whittaker. “Through my volunteer role as a support group leader for caregivers of people with dementia, I am aware of the profound impact that Alzheimer’s disease can have in people’s lives.”

Whittaker has been working with UWinnipeg’s Dr. Melanie Martin (Associate Professor, Physics Department) on examining differences in the brains of mice with signs and symptoms similar to Alzheimer’s disease, using state-of-the-art magnetic resonance imaging (MRI) methods to understand the signs of disease in the brain tissue. A change in the size of the hippocampus – a brain region that is involved with memory – could be used for early diagnosis and treatment of Alzheimer’s disease. Whittaker will be presenting her findings in Toronto, ON in January for a bid to win the prestigious Sunnybrook research prize.

“I am very excited to present the work that I have been doing with Dr. Martin at the Sunnybrook Prize competition,” exclaimed Whittaker. “It is an incredible opportunity to gain inspiration from leaders in biomedical research, and for me, putting my project on a national stage really highlights the relevance of my work and the scope of impact it could have.”

As an undergraduate, Whittaker is involved in cutting edge research while honing her technical skills.  I have learned much about the physics of magnetic resonance imaging and its potential in understanding the early changes to the brain seen with Alzheimer’s disease.

Whittaker’s collaboration with Martin has provided a unique opportunity to combine biological and physical sciences, and develop imaging techniques that may later have medical applications.

“Heather’s interest, knowledge and questions had me believing she was a graduate researcher,” expressed Martin upon first meeting her at a at Dementia Care, an annual conference in Winnipeg designed to provide information to health care workers and the public about dementia. “I have found she does an excellent job at explaining her interdisciplinary research to diverse audiences. I am confidante she will do well in her presentation at this competition.”

The Sunnybrook Research Prize competition  is open to undergraduates in the physical sciences and engineering disciplines who are in their third or fourth year of study at a Canadian university and have an interest in biomedical research.