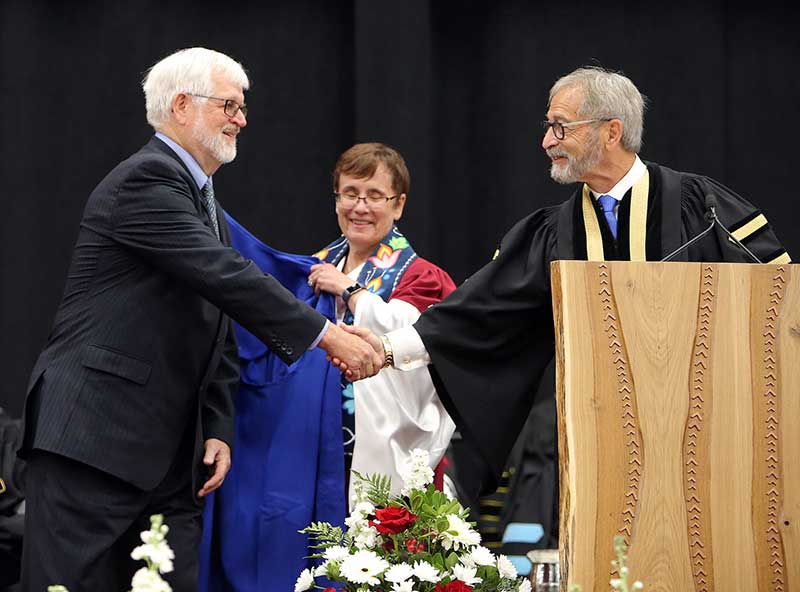 Bob Silver commended for dedication to role and championing the institution

Chancellor Bob Silver is stepping down from his role at The University of Winnipeg. Silver has served as chancellor since 2009.

As chancellor, Silver has been a tireless advocate for The University of Winnipeg in the community and within business and government circles. His leadership in creating the Opportunity Fund — which supports Indigenous students, new Canadians and refugees, and students from inner-city neighborhoods — was instrumental and he is a proud advocate of UWinnipeg’s vision of accessibility, particularly for Indigenous people.

Silver has also lent his voice and credibility in articulating the value and unique role that UWinnipeg plays in creating a vibrant downtown.

“Bob Silver is a leader through and through — in business, community, philanthropy, volunteerism, and more. It’s been a tremendous honour to have him as our chancellor and we commend Bob for the many years he’s dedicated himself to being a champion of The University of Winnipeg,” said Dr. Annette Trimbee, President and Vice-chancellor.

The University of Winnipeg has begun a search process to fill the honorary and ceremonial role of chancellor: the titular head of the University who confers degrees.

Nominees for the role of chancellor are typically those who are distinguished in their field and have a strong connection to the communities of Winnipeg and Manitoba. Duties of the chancellor include attending convocations and conferring degrees; advocating for and being engaged in the work of the University; contributing to the overall University objectives of academic and research excellence, student experience, reconciliation, and financial resiliency; and being an ex-officio member of Senate, the Board and various standing committees.

A search committee consisting of members of UWinnipeg’s Senate and Board of Regents will be constituted shortly. A call for nominees to fill the role of chancellor will take place in October.