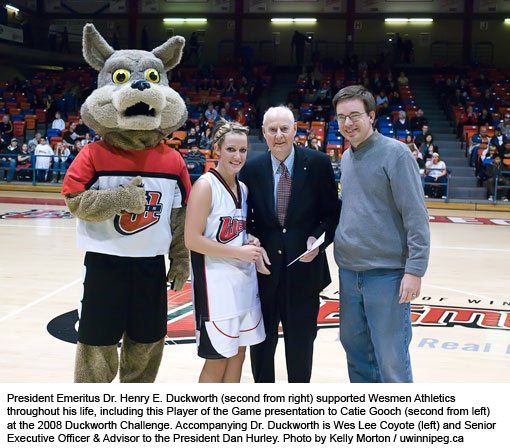 WINNIPEG, MB – The University of Winnipeg today is mourning with profound sadness the passing of its President Emeritus Dr. Henry Edmison Duckworth, OC. Duckworth passed away yesterday in Winnipeg at the age of 93.

“Dr. Duckworth is the epitome of what The University of Winnipeg stands for – academic excellence, commitment, dedication and generosity,” said UWinnipeg President & Vice-Chancellor Dr. Lloyd Axworthy. “In many ways he symbolizes our distinguished history with his nurturing of higher education and his belief in our institution. He will be greatly missed by everyone at the University.”

THE UNIVERSITY OF WINNIPEG – A LONG, MEANINGFUL RELATIONSHIP

Duckworth’s relationship with The University of Winnipeg dated back to 1932, when he first enrolled as a student at Wesley College. Since that time, his contributions were many and his generosity to UWinnipeg was immense.

Duckworth was one of the inaugural members appointed to The University of Winnipeg Foundation’s Board of Directors. He served as the Honorary Chairperson of the Internal Family Campaign.

An accomplished physicist, Duckworth wrote the first definitive text in English on mass spectroscopy, discovered the last stable isotope (platinum) and helped create important programs at universities and at the National Research Council. He became internationally known for his study of atomic masses and their significance to nuclear stability.

During World War II, Duckworth was a junior scientist with the Royal Canadian Corps of Signals assigned to the National Research Council. In this role he was engaged in RADAR development and in work related to the atomic bomb.

Duckworth was the first Royal Society of Canada Fellow from UWinnipeg. He was elected to this elite Fellowship in 1954. Earlier this year, Dr. Jennifer Brown became only the second UWinnipeg professor to earn this prestigious honor.

His many academic honors include the Medal of the Canadian Association of Physicists, the Tory Medal of the Royal Society of Canada and the ATCO-SUN Medal of the International Union of Pure and Applied Physics (IUPAP).

His publications included a monograph on Mass Spectroscopy (Cambridge University Press), a text on Electricity and Magnetism (Macmillian), an autobiographical memoir, One Version of the Facts (University of Manitoba Press) and numerous research papers.

Duckworth was named an Officer of the Order of Canada in 1976 for, as the citation noted, “his contributions to physics at university education and his service on numerous scientific and educational bodies.”

Duckworth’s impact on student life at UWinnipeg was significant and continues to this day. The Duckworth Centre is the gymnasium that plays host to The University of Winnipeg Wesmen basketball and volleyball teams, student fitness activities and dozens of community events every year.

The Great Rock Climb began in 1972 as the brainchild of Duckworth. In the event, teams of three students race from the front steps of Wesley Hall across the Portage Commons area to then climb a large, 25-ton granite boulder. The Rock of Remembrance commemorates the 100th anniversary of Manitoba College, a founding college of what is now The University of Winnipeg. The University of Winnipeg’s Great Rock Climb celebrates endurance, ingenuity and teamwork.

The Duckworth Challenge began in 1992, also as the brainchild of Duckworth. The event, named in his honor, offers an annual opportunity for friendly competition between The University of Winnipeg Wesmen and the University of Manitoba Bisons sports teams.

Duckworth’s name and support also belongs to several student scholarships that are awarded annually. As President, he oversaw the establishment of the joint masters programs between The University of Winnipeg and the University of Manitoba.