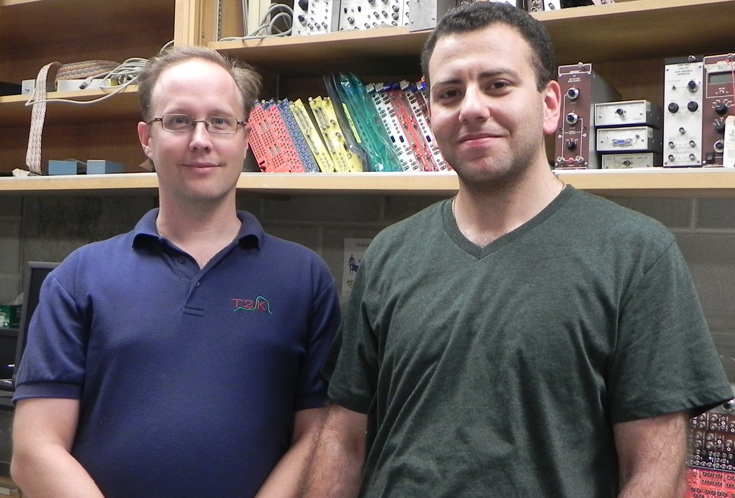 This discovery was made by a collaborative international team that includes UWinnipeg assistant professor of physics Dr. Blair Jamieson and his Egyptian graduate student, Fady Shaker.

The Tokai to Kamioka (T2K) team consists of physicists from 59 institutions in 11 countries, including Canada. The T2K experiment is situated in Japan, where a beam of muon neutrinos is produced in the Japan Proton Accelerator Research Complex (called J-PARC), located in Tokai, Ibaraki prefecture, on Japan’s east coast. Wilking confirmed definitive observation of a new type of neutrino oscillation, in which muon neutrinos transform to electron neutrinos, thanks to the T2K team. It has been known that neutrinos transform from one kind into another, but this particular transition had never before been conclusively observed.

UWinnipeg’s Jamieson, part of the Canadian team known as T2K-Canada, is the lead on the T2K near detector data concentrator electronics upgrade. He brought the project to UWinnipeg after his post-doctorate research at the Sudbury Neutrino Observatory (SNO).

“I have been interested in neutrinos since the SNO first saw definitive proof that the deficit of electron-neutrinos from the sun was due to neutrinos transforming from one flavour to another,” expressed Jamieson. “I joined the SNO collaboration as a post-doctorate and developed a new analysis for the Phase-III SNO measurement.”

In order to further study neutrino oscillations, Jamieson joined the T2K team and was a key player in the construction of the Time Projection Chambers (TPCs) for the T2K near detector in Tokai, Japan. The TPCs are the most complex detectors in the T2K experiment, and the data concentration cards (DCC), which collect data from over 100,000 channels, provide 400 physicists from 59 institutions in 11 countries an improved understanding of how these elusive particles interact, via detailed images of the charged particles produced in neutrino interactions. These detailed images will become increasingly important as measurements of neutrino properties become more precise.

UWinnipeg graduate student Shaker has also been a key player in the DCC upgrade, and will become involved in the next round of T2K data collection and analysis next summer.

“I came to Winnipeg to study neutrino physics with the T2K experiment,” explained Shaker. “The  capability of measuring neutrinos is a very important role in the search for charge parity (CP) violation. I am looking forward to being part of the analysis of the next wave of T2K data, and beginning to probe for differences between neutrino and anti-neutrino oscillations.”

The T2K experiment was constructed and is operated by an international collaboration team that currently consists of physicists from 11 countries [Canada, France, Germany, Italy, Japan, Poland, Russia, Switzerland, Spain, UK and US]. The experiment is primarily supported by the Japanese Ministry of Education, Culture, Sports, Science and Technology (MEXT).

This discovery was made possible with the unyielding and tireless effort by the J-PARC staff members and management to deliver high quality beam to T2K after the devastating March 2011 earthquake in eastern Japan, which caused severe damage to the accelerator complex at J-PARC, and abruptly discontinued the data-taking run of the T2K experiment. More detailed information on the T2K experiment and collaboration can be found at http://t2k-experiment.org.