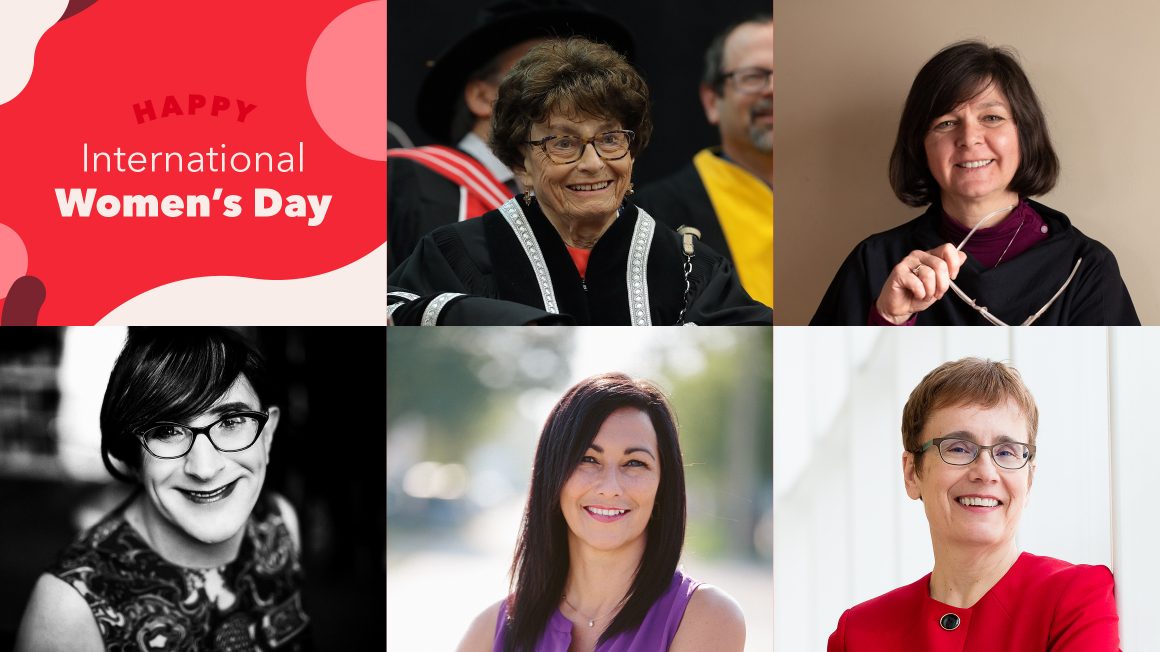 In recognition of International Women’s Day, The University of Winnipeg is highlighting five women leaders, researchers, and community builders whose work has made a significant contribution in shaping the world around us.

“We recognize all of the women who have helped create a better society through education, reconciliation, and human rights advocacy,” said Dr. James Currie, UWinnipeg Interim President and Vice-Chancellor. “We are proud to celebrate their achievements and contributions.”

There is something very specific associated with Dr. Annette Trimbee that people mention over and over — there she is, grabbing a bowl of soup in the cafeteria, and before you know it, you’re sitting with her and chatting about your day, your research, or your thoughts on reconciliation. This is true if you are a student, professor, staff member or visitor to campus. She is curious, and she listens.

“When a Métis person, in particular a woman, is in such a position to influence the footprints of youth of all kinds, that is an exceptional woman,” said Elder Myra Laramee in a blanket ceremony held to honour Trimbee in June 2020. 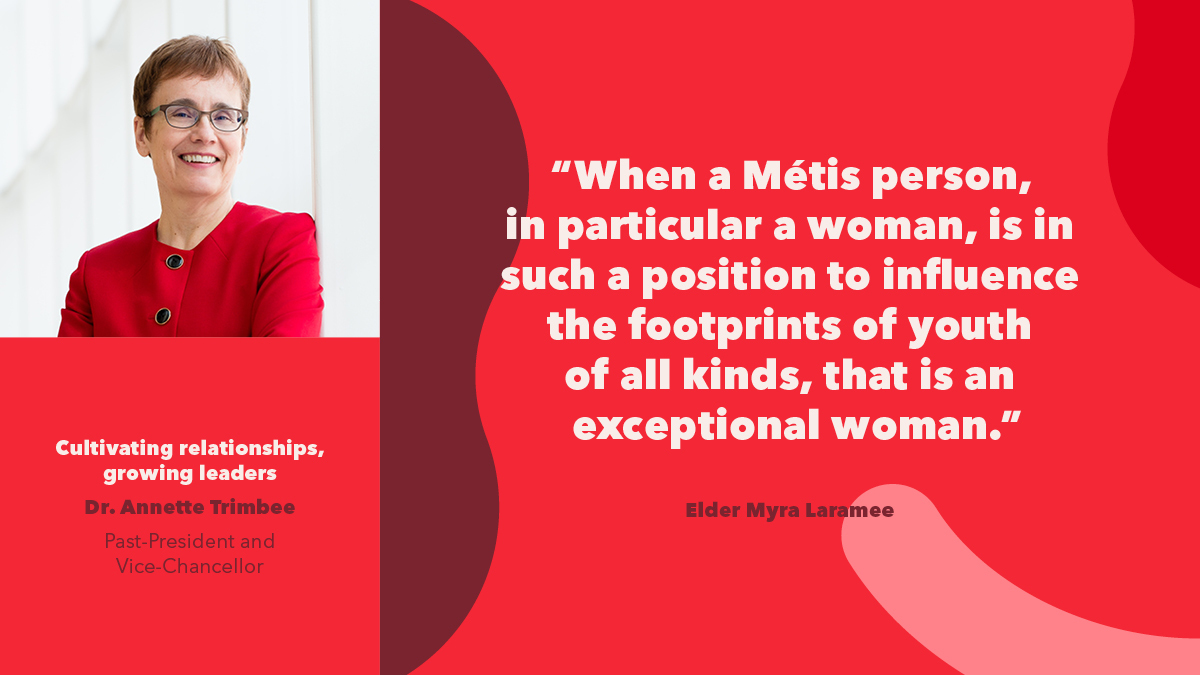 Trimbee served six years as President and Vice-Chancellor, from 2014-2020. Along with her team, she has accomplished many things by fostering collaborative partnerships both on- and off-campus. One of the first challenges she tackled was creating a blueprint, a series of strategic directions to guide planning and decisions at all levels of the University.

Eric Johnstone started his term as Chair of the Board of Regents almost to the day that Trimbee walked into the President’s office in Wesley Hall in 2014. They would develop a close working relationship.

“One of the most important pieces of work to come out of the Board and President’s office was the strategic directions,” says Johnstone. “Our objective was to measure what we were trying to accomplish. It helps to make choices within the context of a framework of priorities. Annette really took that to heart. She respects the role of governance and the strategic directions came organically out of the relationships that she was building with students and faculty and with stakeholders. It has accomplished what we were hoping, which is to help us understand who we are, and want to be, and what roads to go down.”

“She is a powerful, aspirational role model,” said UWinnipeg alumna Janelle Gobin. “For students like me, interested in public administration, to see a woman president, and with her past experience in government, here is someone who has achieved so much.”

The late Dr. Marsha Hanen was the first woman to serve as President and Vice-Chancellor of UWinnipeg and was a staunch believer in the importance of liberal arts and science education at the undergraduate level.

Hanen’s consultative leadership style and inclusive nature left an ineradicable mark on UWinnipeg, and beyond. She provided inspiration to women in education, encouraging attitudinal change, and innovation among academics, business leaders, and law makers. 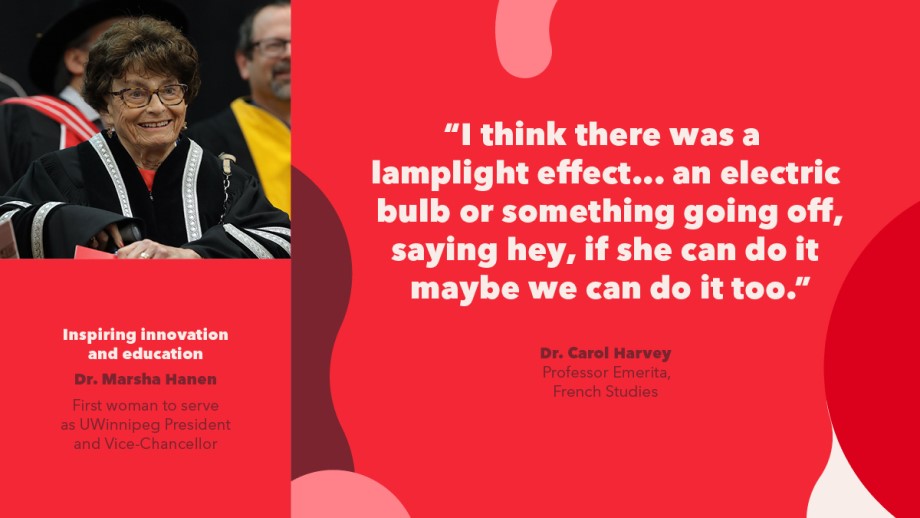 In June 2018, UWinnipeg renamed the Spence Street mall Marsha Hanen Way to recognize Hanen’s legacy. In a video created to commemorate this event, Dr. Carol Harvey, Professor Emerita an Fellow of United College, spoke of  the impact of Hanen’s influence on future generations.

“I think there was a lamplight effect, if you like, sort of an electric bulb or something going off, saying hey, if she can do it maybe we can do it too,” said Harvey. “I think it’s good to have a role model who can inspire in other women the possibility of leading, the possibility of going on to higher education, perhaps aspire to being a dean, a vice-president, and eventually a president. It’s a huge hill to climb.”

UWinnipeg honours Dr. Hanen’s legacy by awarding the Marsha Hanen Excellence in Creating Community Awareness Award each year, which recognizes the activities of faculty and staff who reinforce the value of a liberal education and expand understanding of, and respect for, The University of Winnipeg.

Diane Roussin is an Anishinaabe community leader committed to the pursuit of mino-bimaadiziwing (the good life), a concept that recognizes the importance of living in balance with all the earth.

She has worked tirelessly, primarily in Winnipeg’s inner city, for initiatives that promote Indigenous People’s values and ways of knowing and being. 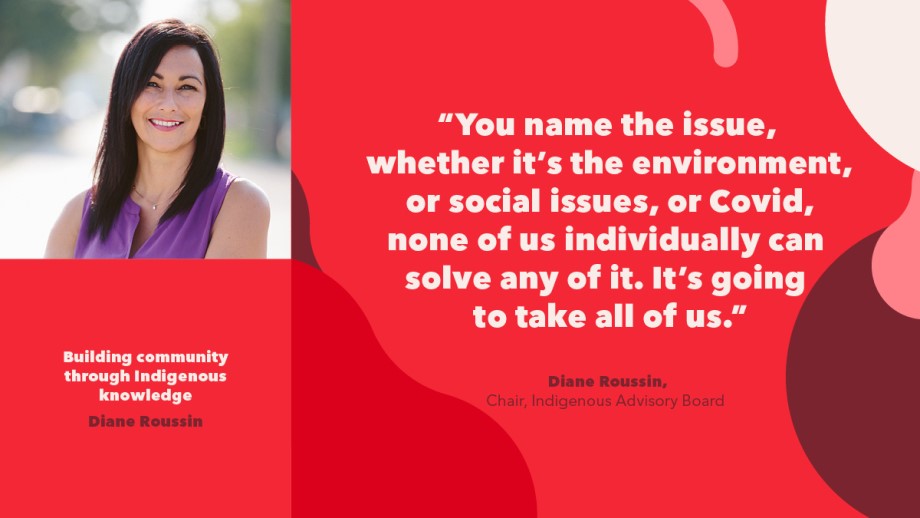 “Throughout my career, I’ve been very privileged to work in an environment that totally aligns with my personal values; that upholds and centres Indigenous approaches, perspectives, and experiences,” she said.

Roussin’s leadership over the years includes time as executive Director of the Ma Mawi Wi Chi Itata Centre, co-director of the Community Education Development Association, and coordinator of The Centennial Neighbourhood Project. She currently sits on the board for the Winnipeg Foundation and the Winnipeg Art Gallery.

As project director of the Winnipeg Boldness Project, she is dedicated to creating large-scale systems change for children and families in the Point Douglas neighbourhood where she sees first-hand the impact of centering Indigenous wisdom to support the health and well-being of the community.

“Societal challenges have been around forever, but we seem to be more aware than ever of our interconnectedness,” she said. “You name the issue, whether it’s the environment, or social issues, or Covid, none of us individually can solve any of it. It’s going to take all of us.”

Roussin believes that many complex social issues can be solved through collaboration and relationship-building.

“We have an opportunity to centre different knowledge systems that can build better resources, better systems, and better approaches that will first and foremost have better health and wellness outcomes, but also be more sustainable and economically viable,” she said.

Her in-depth knowledge of Indigenous issues and solutions flow directly from her strong sense of identity and worldview, which she shares generously as longtime chair of UWinnipeg’s Indigenous Advisory Board.

“Originally there was a group of us asked to be on an advisory circle for the MDP program. That circle quickly evolved into an Indigenous Advisory Circle for the whole university,” she said. “I feel like UWinnipeg recognized at the time – and still does – the importance of community, the interconnectedness of all of us working together for the greater good.”

Dr. Mirjana Roksandic is a professor in the Department of Anthropology and the coordinator of an interdisciplinary program in bioanthropology. Her research into Pleistocene hominin evolution in Europe and mortuary ritual among sedentary and semi-sedentary archaeological hunter-gatherers is helping reshape our understanding of early human history. 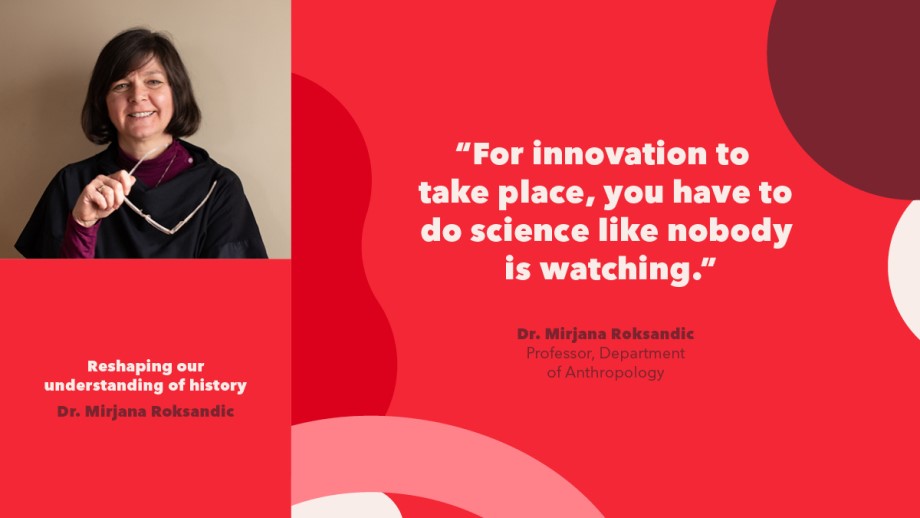 Roksandic is an esteemed biological anthropologist whose expertise, extensive field experience, and commitment to her students’ success makes her a respected educator. Her work is fueled by a curiosity that sometimes sees her waking up at 4:00 am to take part in virtual meetings with collaborators on the other side of the globe.

“It’s not as hard as it sounds because it’s so much fun,” she said. “You never know when you are going to come up with something that will actually make a huge impact on society, even if we don’t really perceive it or realize we are doing it at the time.”

She regularly works with people from diverse backgrounds and cultures which she says fosters meaningful thinking and inspires innovation.

“I love bouncing ideas, having different people talk about the same thing in different ways,” she said.

She hopes to instill this love of deep curiosity in her students.

“For innovation to take place, you have to do science like nobody is watching,” she tells them. “It’s like art. You paint because you have to paint. You do science because you have to learn. You’re not painting so you can sell to the highest bidder. You can do it, but you’ll never achieve the same prominence as Picasso or someone else who painted because they had to.”

When students come to her eager and interested, she does whatever she can to help them reach their goals.

“Its probably the best part, seeing my students take flight,” she said

Roksandic’s research covers continents and offers insights into the world of ancient humans. Her work is transforming anthropological understandings and advancing science in Manitoba and the world.

“I work with a lot of really intelligent people, but what is most important to me is that they are nice,” she said. “We distinguish ourselves by being good humans, being proactive in promoting others.”

Lara Rae, empowering others through comedy and cooking

Lara Rae is an instructor in the Department of Women’s and Gender Studies.  In addition to her role at UWinnipeg, Rae is a comedian and a television and radio writer whose work has garnered Gemini nominations and three Canadian Comedy Awards.

Rae co-founded the Winnipeg Comedy Festival with CBC Radio’s Tom Anniko in 2002, and worked as the festival’s artistic director for close to two decades.

“My proudest moments at the comedy festival were always when we took a chance on a young comic and they hit it out of the park,” she said. 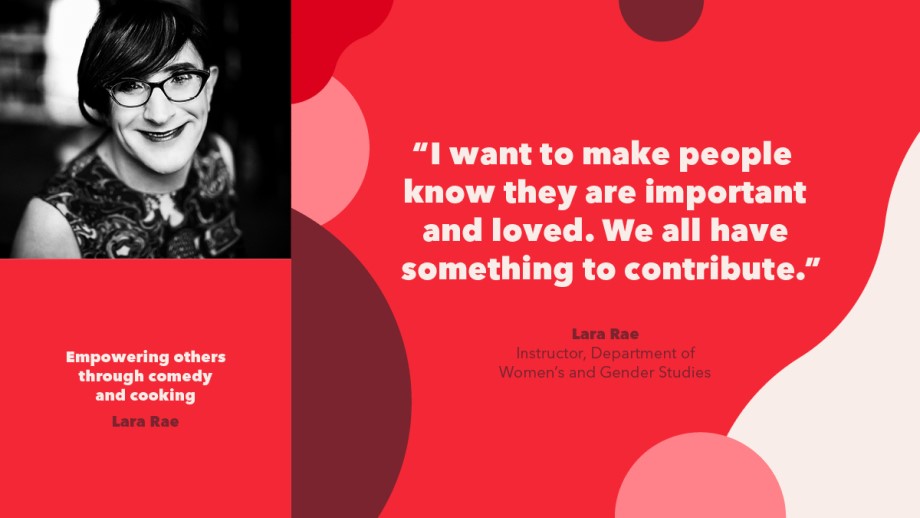 She strives to lead by example, cultivating an inclusive environment that empowers others.

“It makes me extremely proud when people tell me that exposing them to different backgrounds and challenges has changed the way they think about another group of people,” she said.

In response to a growing need, she recently founded the food insecurity group, PANTRY, a community-based project that provides food, winter clothing, and other supplies to people struggling with food and shelter insecurity.

This project allows Rae to turn her passion for cooking into community service.

“I want to make people know they are important and loved,” she said. “We all have something to contribute.”

International Women’s Day takes place each year on March 8. It is a global celebration of women who, throughout the year, play an extraordinary role in advancing gender equality in their communities. 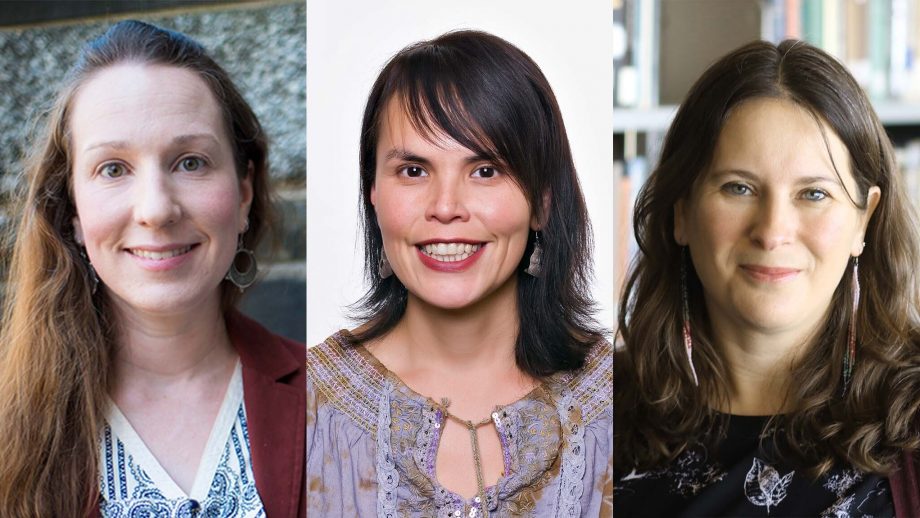 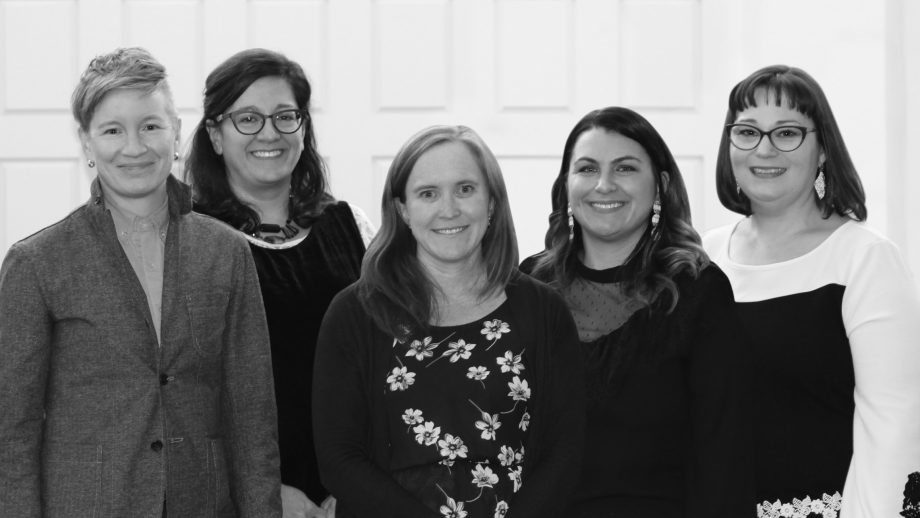 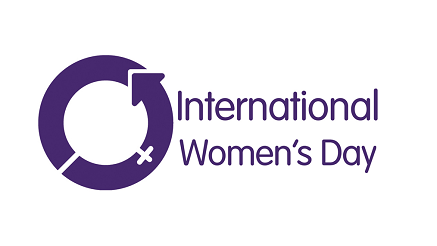