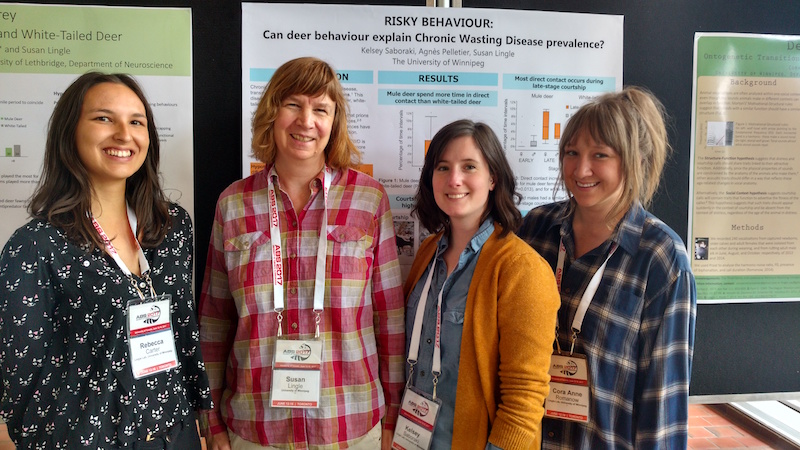 Equipped with detailed posters about deer and elk, and a passion for animal behaviour, three UWinnipeg students travelled to the University of Toronto Scarborough Campus last month to take part in the annual conference of the Animal Behavior Society (ABS).

The ABS works to promote the study of animal behaviour and its yearly meeting is a chance for scientists from every field to come together and discuss ideas. Faculty of Science students Cora Anne Romanow, Rebecca Carter, and Kelsey Saboraki, accompanied by Dr. Susan Lingle (biology), were among the more than 700 delegates to attend this year’s event.

According to Lingle, conferences like the ABS give students an opportunity to network with other students and senior researchers who may someday be their colleagues or collaborators.

All three students delivered poster presentations during the conference and Lingle gave an oral presentation titled: “White-tailed females use mule deer mothers as baby-sitters for their fawns.” Romanow, who is an honours student in the Department of Biology, won an honourable mention in the undergraduate poster competition for her poster on the differences and similarities of infant distress calls and male courtship calls in elk.

“This research means a lot to me, and I have put in a lot of hard work to ensure that it is top-notch (triple-checking my work and reading extensively to ensure I understand the nuances of the acoustic measurements I am taking),” she said. “So getting the recognition is very heart-warming.”

Romanow and Carter, who is also an undergraduate honours student in biology, are currently spending the summer studying play behaviour in white-tailed deer and mule-deer fawns on a cattle ranch in Alberta. This fieldwork expands on Carter’s recently completed honours thesis and includes a lot of trekking through rolling hills and hiding in long grass to collect data on mothers and fawns.

Carter’s poster presentation at ABS was also related to her play behaviour research, which is based on the differences in the way mule deer and white-tail deer defend their fawns from predators — by attacking and fleeing, respectively.

“Because of this, I was expecting play to be different between both species as play is thought to be training for adulthood,” she said. “However, with my results so far, the play appears to be similar for both species which may be suggesting that play is used to develop something shared like motor development, balance, strength and/or endurance.”

Saboraki is pursuing a master’s in Bioscience, Technology and Society with a focus on disease ecology and conservation. Her poster at ABS was related to her master’s research on the behavioural transmission of Chronic Wasting Disease, which is a fatal prion disease that is similar to mad cow disease, in mule deer and white-tail deer.

Saboraki says one of the highlights of the ABS conference was attending a workshop on Conservation Behaviour, during which attendees got to collaborate with wildlife management officials.

“The workshop gave us insight into applying behavioral biology to conservation issues,” she said. “The presentations on animal behaviour, given by brilliant scientists, provided insight into my own research and gave me some ideas for future work.”

Click here to find out more about the research taking place in Lingle’s lab.