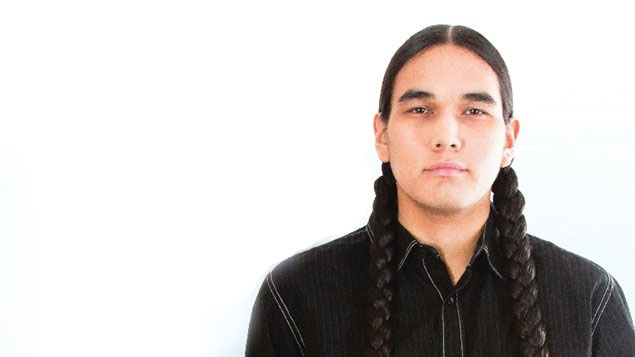 Settee’s living a good life as an advocate and mentor for his colleagues and community has resulted in his being  awarded the City of Winnipeg’s the 2014 Lehotsky Scholarship, worth $5000.

Settee is a grounded advocate for the health and safety of people in Winnipeg’s inner city and currently works for UWinnipeg’s Wii Chiiwaakanak Learning Centre.

“Kevin is a young Aboriginal man who is playing an important leadership role in Urban and Inner-City Studies program,” said Dr. Jim Silver, Chair of Urban and Inner-City Studies. “He is a role model for the growing numbers of Aboriginal students and Aboriginal men in particular that we are attracting into our department on Selkirk Avenue. His quiet and strong leadership and his keen intelligence also serve as an important breaker of stereotypes.”

Settee has been very involved in the issue of missing and murdered Indigenous Women and girls, as the main organizer of two commemorative All Nations Medicine Walks in Winnipeg. He has also played an active role in the Aboriginal Men Anti-Violence Campaign. In addition, he has been very active in sports, most recently as a lacrosse coach at Gordon Bell High School, from which he graduated in 2008, prior to attending university.

“Kevin Settee grew up in the West End,” said Mayor Sam Katz. “His work and attitude are inspirational and truly embody the spirit of the award. I am proud to present Kevin with the 2014 Lehotsky Scholarship.”

Kevin grew up and attended school in the West End, having lived on Home Street and attended Greenway and Gordon Bell Schools. He has been raised in a traditional way and is active in various important ceremonial events. He conducts pipe ceremonies in schools, which is particularly important for Aboriginal youngsters many of whom are not aware of their valuable cultural heritage.

About the Lehotsky Scholarship
Students are nominated by community members, and the award is granted by a committee that includes a member of City Council and representatives from New Life Ministries. The Mayor awards the annual scholarship of up to $5,000 to one or more eligible students who have displayed an exceptional effort as an advocate for the health and safety of people in the Winnipeg’s West End through community leadership or volunteerism. The scholarship builds on Rev. Lehotsky’s legacy of community building and is awarded each year to inner city youth in honour of his work in the Winnipeg’s West End community. It was created in 2006 by Mayor Sam Katz in partnership with New Life Ministries.