A successful regular season by the Winnipeg Wesmen Women’s Volleyball team has turned into several individual’s being recognized for their efforts.

The University of Winnipeg Wesmen and the Canada West Universities Athletic Association are pleased to announce that:

– Ozana Nikolic has been named the Canada West Women’s Volleyball Rookie of the Year and a Second Team Canada West All-Star.

– Tesca Andrew-Wasylik has been named the Libero of the Year 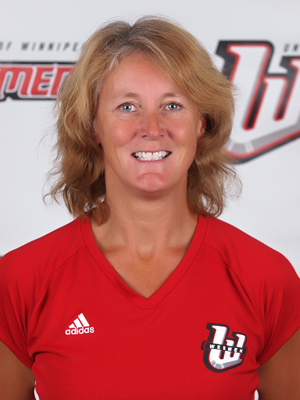 Ozana Nikolic, was a starter from the beginning of the season and finished third in the conference in kills with 238. The 5’11 left side finished second on the team with 210 defensive digs, which placed her ninth in the Canada West Conference. Nikolic had a season high 22 kills against Thompson Rivers University Wolf Pack (November 25, 2011) and had 22 defensive digs in match at Alberta (November 18, 2011). During the regular season, she recorded 10 plus kills in 15 regular season matches.

“Ozana is a very gifted athlete, she is so raw on so many levels yet so amazing. She has played a significant role in our team success this season. Ozana is such a wonderful athlete to coach, everyday is Christmas”, said Wesmen head coach Diane Scott

Fifth year libero Tesca Andrew-Wasylik’s play this season played a huge part in the success of the Winnipeg Wesmen. The Unionville, Ontario product was a starter in every match for the Wesmen, averaging 4.11 digs per set and 308 in total. This placed her second in the conference in this category. Her stellar play helped the team finish second in team digs during the regular season. Andrew-Wasylik dug up a season high 24 digs in a match against Calgary (November 11, 2011).

“We were so lucky to have the opportunity to have an athlete and team mate like Tesca join our team. Her passion, athleticism and skill have helped us take a step forward. Tesca is an amazing personality in the team room and on the court”, added Wesmen head coach Diane Scott.

Diane Scott in her 17th season as head coach guided the Winnipeg Wesmen Women’s Volleyball team to a 14-6 regular season record and a tie for second place in the Canada West Women’s Volleyball Conference standings. Under Scott’s guidance the Wesmen doubled their regular season win total from last year (7-13) and were ranked in the CIS Top Ten every week during the regular season. An accomplished coach, Scott guided the Wesmen to a CIS silver medal finish in 2002-2003 and was honoured as the Great Plains Athletic Conference Coach of the Year in 1995-96.

“I am very pleased that Diane has won the Canada West Women’s Volleyball Coach of the Year award. She has instilled a positive attitude in this group of young women. I believe it is her mentoring and coaching abilities that have resulted in the dramatic turn around of the program. She deserves all of the accolades that come her way”, added University of Winnipeg Athletic Director Doran Reid.

Lauren Sears, fifth year middle and team captain played a vital role in leading the Wesmen to a 14-6 regular season record and a spot in this weekend’s Canada West Final Four. She led the team in service aces (41), blocks (72), points (320.5) and finished second in kills with 225. She finished in the top 10 in several Canada West statistical categories including 1st in service aces and points, 5th in number of kills and blocks and 8th in hitting percentage. During the regular season she set a Canada West Women’s Volleyball single season record for most service aces in a season with 41, breaking the old mark of 37. Sears was named the Canada West Female Athlete of the Week for the period ending January 15, 2012. She was also honoured as the University of Winnipeg’s Female Athlete of the month in November 2011 and February 2012.

“Lauren has grown and improved each season. She is the complete package; commitment, skill, role model, academic, and leader. Lauren has achieved what most athletes strive for, she has had her best season in her 5th year, with room left to grow. Lauren has played a huge role in the growth of our program the past four seasons and for the success of our program this season”, said Wesmen head coach Diane Scott.