President and Vice-Chancellor of The University of Winnipeg 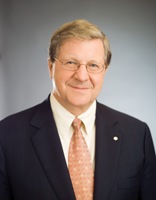 Dr. Lloyd Axworthy
President and Vice-Chancellor of The University of Winnipeg

2007 has been an historic year at The University of Winnipeg — one that marked 40 years as a university and 136 years of excellence. We are proud of the positive achievements we have realized together this year and look forward to a bright and dynamic future for our students, faculty, staff and community in 2008 and the years beyond.

Throughout the year, we continued to lay out a vision for the future of the University that both builds on our strengths and traditions, and sets out new directions.

We launched our innovative new Opportunity Fund with the Chantal Kreviazuk concert early in 2007. With its flexible bursary and tuition credit account programs, the Opportunity Fund makes a post-secondary education accessible to youth from inner-city neighbourhoods, Aboriginal students, young people from war-affected nations and refugee populations. In the spirit of giving, I encourage you to give to the Opportunity Fund.

UWinnipeg is also taking a leadership role nationally by hosting the Aboriginal University Education Roundtable. The second phase took place in November at which senior officials from 20 universities, First Nations and Métis educational institutions and governments agreed to accelerate efforts to improve the success of Aboriginal students in Canadian universities.

We also kicked off our A World of Opportunity Capital Campaign, the largest fundraising campaign ever undertaken by this University. To date, the Campaign has raised an inspiring $55.5 million towards its $70-million goal. For more information or to give today, please visit www.uwinnipegcampaign.ca.

We have already seen progress on a number of our exciting capital projects including the re-landscaping of front lawn in front of Wesley Hall, known as Portage Commons, the opening of our beautifully restored Convocation Hall, and expansion to the Duckworth Centre with a new fitness facility set to open in January. Work also continues on the CanWest Centre for Theatre & Film and construction will soon begin on the new “Furby” campus – future home of the Richardson College for the Environment and Science Complex, a new housing building and an expanded child care facility.

At the same time, our university continues to maintain a stellar reputation for academic excellence on a national level. UWinnipeg ranked 9th overall in Canada among primarily undergraduate universities – up three places from last year – in the Annual Maclean’s Ranking of Canadian Universities.

In the recent Globe and Mail 2007 Report Card students gave UWinnipeg top marks in quality of education and class size, and placed us first among Western Canadian universities for academic reputation and quality of teaching. This is a true testament to dedication and professionalism of our faculty and teaching staff.

Early in 2008, we will officially launch a new Faculty of Business and Economics. And we are very pleased to be offering a number of unique, stand-along graduate programs in Aboriginal Governance, Applied Computer Science and Society, Bioscience, Technology and Public Policy; and English with a focus on Cultural Studies.

Clearly, it’s been an invigorating year on The University of Winnipeg campus. And we plan to make 2008 an even more inspiring year.

On behalf of all members of The University of Winnipeg community, I wish you and your family a joyous holiday season and best wishes for the year ahead.