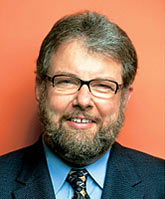 WINNIPEG, MB – The Honourable Reverend Bill Blaikie, MP, PC has another impressive achievement to add to his lengthy list of accomplishments today, as Maclean’s Magazine named The University of Winnipeg alumnus and future Theology and Politics faculty member, its Parliamentarian of the Year.

“The University of Winnipeg proudly congratulates Bill Blaikie, who was recently honoured by his alma mater with an Honorary Doctorate of Divinity and who will also soon be sharing his wisdom and expertise with our students as a faculty member in Theology, for being honoured as one of the most respected parliamentarians in this country,” said UWinnipeg President & Vice-Chancellor Dr. Lloyd Axworthy. “The University of Winnipeg is carrying on a tradition of academic excellence,” he added, noting the honour bestowed today on Bill Blaikie follows last week’s announcement of UWinnipeg receiving its 30th Rhodes Scholar in Aaron Trachtenberg.

Bill Blaikie is a proud graduate of The University of Winnipeg in Philosophy and Religious Studies (BA ’73) and is the longest-serving Member of Parliament (Elmwood-Transcona currently in the House of Commons. Blaikie announced last winter that he will not seek re-election in the next federal election and has accepted an appointment as Adjunct Professor in Theology and Politics at The University of Winnipeg once his parliamentary obligations are completed.

In his current position as Deputy Speaker of the House of Commons, Blaikie became the first New Democrat to serve in the role, which reflects the high regard in which he is held by all parties. The University of Winnipeg recently honoured Blaikie for his achievements as an exceptional parliamentarian and outstanding public voice on the environment, globalization and human rights with an Honorary Doctorate of Divinity at a special convocation ceremony held during the University’s 40th Anniversary Homecoming celebrations, Sept. 14, 2007.

The Maclean’s announcement said Blaikie has, “been in the thick of things, playing a role in shaping laws as historic as the Canada Health Act and the Clarity Act.” President Axworthy noted UWinnipeg students stand to benefit greatly as Blaikie moves into an academic career, sharing his 28 years of political experience with our students.