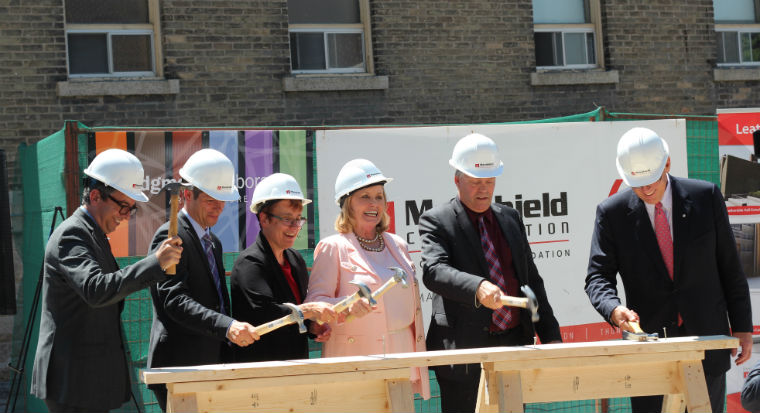 A ground-breaking ceremony was held today to celebrate construction of Leatherdale Hall, a $ 4.75 million dollar addition to The University of Winnipeg’s Wesley Hall and the Collegiate high school on campus. A generous lead gift of $2.5 million in November 2015 from the late Dr. Douglas W. and Mrs. Louise Leatherdale has attracted an additional $1 million to date from generous donors* through a fundraising campaign co-chaired by Dr. Jim MacDonald and Dr. Jim Richardson, UWinnipeg Foundation Board Members. 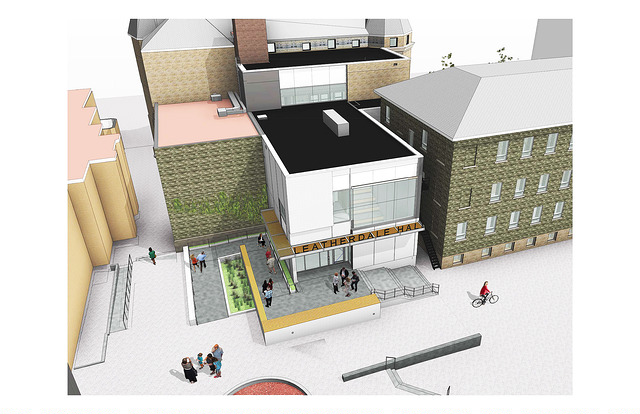 Connected to Convocation Hall, the new flexible multi-use space can seat 150 people and be converted to a lecture hall, reception area and break-out room for conferences. The design allows for future development of a digital media hub. Leatherdale Hall will see the return to campus of Tony’s Canteen, a much loved gathering space for students which currently has an active crowdfunding campaign.

The late Dr. Douglas W. Leatherdale graduated from United College in 1957 (which became the University of Winnipeg in 1967) and he and his wife Louise are longtime donors to both UWinnipeg and The Collegiate.

“I am honoured to be part of today’s celebration and I know Doug would be very pleased to see the incredible progress being made here today.  Leatherdale Hall will be a beautiful addition to Wesley Hall, and a much needed offshoot to Convocation Hall,” said Mrs. Louise Leatherdale. “I look forward to seeing the project come to life and most importantly, seeing it serve the community as a vibrant meeting place and center of academic life.”

“Leatherdale Hall is about connecting and creating people spaces, both for students and the broader community,” said Dr. Annette Trimbee, President and Vice-Chancellor, UWinnipeg. “It is a lasting legacy that reflects the Leatherdale family commitment to education and providing opportunities for our next generation of leaders.”

“The University community is tremendously grateful for Louise and Doug’s generosity.  Their gifts to the University exemplify how much they value the heritage and history that have made UWinnipeg the rich institution it is today,” said Dr. H. Sanford Riley, Chair, UWinnipeg Foundation. “Their previous gift to restore Convocation Hall brought an historic location back to its rightful place as the symbolic ‘heart’ of the University. This most recent gift to Leatherdale Hall further enhances this space, it’s functionality and welcomes a broader community of students, faculty, staff and friends to enjoy our campus.”

Construction of Leatherdale Hall is expected to be completion by early 2017. Project management is by The University of Winnipeg Community Renewal Corporation; the architect is Bridgman Collaborative Architecture; and construction is by Manshield Construction.

The late Dr. Douglas W. Leatherdale ‘57, United College alumnus and wife Louise have been longtime donors to The University of Winnipeg and The Collegiate. In 1953, a teenaged Dr. Leatherdale moved from the family farm in Morden, Manitoba to attend United College on scholarship and spent four years living in residence in a turret room at Wesley Hall. Having never been away from home, this experience opened his eyes to a new world, introducing him to arts and culture, heated debates and political discussions.

Dr. Leatherdale would go on to become Chairman, President and Chief Executive Officer of The St. Paul Companies, and a founding member of the UWinnipeg’s Foundation. He passed away on December 6, 2015. Louise Leatherdale was born in Duluth, Minnesota and is a graduate of Indiana University.  She manages Leatherdale Farms, an international Hanoverian horse breeding operation.

*In addition to the lead gift of $2.5 million, the Campaign has raised over $1 million to date from the following generous donors: 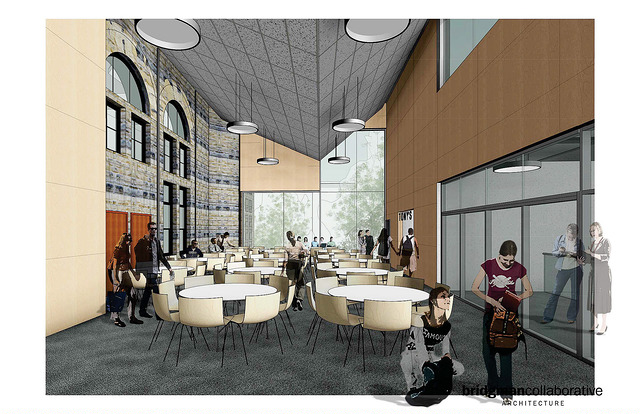 Tony’s Canteen was the central hub of life in what was then United College, a place for students and faculty to meet, work, debate, eat and to get to know each other. Named after Tony Kozyra, Tony’s Canteen was where hundreds of parties, college functions, and socials were planned at the original salmon-coloured tables in the basement of Wesley Hall. Whenever there were late-night events or students studying for exams, Tony kept the canteen open long after midnight. Tony ran the Canteen from 1936 until his passing in 1965.