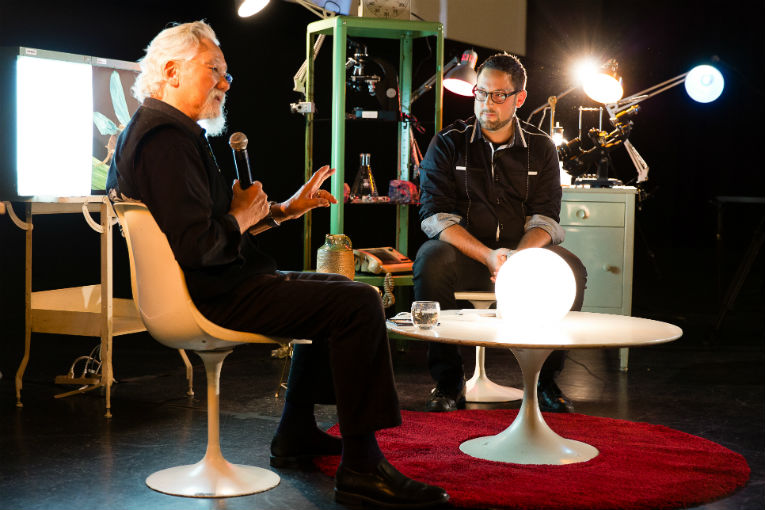 A CONVERSATION WITH DAVID SUZUKI

Many will read this and be surprised. You might be thinking: ‘wasn’t it only a few years ago I saw him promoting a Nature of Things episode by posing naked with a fig leaf covering his private parts and looking totally ripped?” Indeed, Suzuki has an ageless quality – he seems to have always been there, helping to narrate the story of our lives, and that of our country.

Like many Canadians, I grew up watching him on TV, learning about science and being inspired by the marvels of the natural world and Suzuki’s consistent message that we need to protect it. Decades later, as our nation struggles with the reality of climate change and our obsession with fossil fuels, Suzuki’s perspectives and life contributions are more relevant than ever.

As Suzuki enters this final stage of life – the “death zone” as he calls it – it’s a useful time for us to reflect on our own lives and impact. We might also ask: while Suzuki still walks the planet, what else can we learn from this person whom many consider the greatest living Canadian?

As a university student, we studied Suzuki in our Environmental Science classes, and while working on my PhD and an associated film on farmer knowledge and genetically modified crops I got to meet and collaborate with him. As a geneticist, Suzuki remains an influential and critical voice regarding the patenting of life and use of biotechnology to shape our food supply, just one example of the many social and environmental justice issues he supports.

If you ask David why he has such a profound respect for nature, he quickly takes you back to his early memories of living outside in British Columbia. His family – like many Japanese Canadians during the Second World War – was sent to an internment camp for a number of years after the bombing of Pearl Harbor. David played in the rivers and forests, immersed in the beauty of one of our country’s many remarkable ecosystems, a green backdrop for the discrimination of that era.

David thrived in school, becoming a high school president, and getting a scholarship to attend a top US College. Many believed he would become a medical doctor, but a genetics class captured his imagination, and he went on to become a groundbreaking researcher for his work on temperature sensitivity in fruit flies. As a Professor, he was known for the quality of his lectures – from a young age his father encouraged his oratorical skills – and gravitated towards media for public education. From campus to commercial television, Suzuki soon became a household name on CBC’s The Nature of Things, which he began hosting in 1979. I like to remind him that was the year I was born!

For over a decade, I’ve had the privilege of getting to know David, and experience his generosity and mentorship first hand as I made a trilogy of films on climate change in Canada that we have toured across the country together as fundraisers for local environmental and Indigenous groups. Suzuki’s dedication to the next generation is not just through his mastery of cutting edge science and its communication, but also a commitment to real world action that inspires citizens globally to live cleaner, greener and healthier lives. Indeed, he co-founded the David Suzuki Foundation in order to support Canadians in their transition to the low carbon, resilient and sustainable country, which he believes is possible.

One day, while on tour with David in Atlantic Canada, the same week that he was making national front-page news for claiming ‘environmentalism has failed’, a man approached him and said: “I’m glad you’re saving the world for the rest of us”. David accepted the compliment, but also offered a polite challenge, and said: “I’m just one person, what are you doing to make a difference?”. By witnessing this conversation, I had a realization: we’re so fortunate to have David Suzuki, but his energy and effectiveness over the years has also cultivated complacency. Many incorrectly assume environmentalism is the job of a few dedicated people or organizations, yet the enormous planetary challenges we face require large-scale collective action across our cultures, economies and ecosystems.

Today, as we pay tribute to the contributions of David Suzuki at 80 years, we must realize that although he is a Canadian legend worthy of much praise and celebration – at the end of the day – he is a person just like the rest of us. The difference is he decided to take his knowledge of the state of the world and do something about it.

Imagine what would be possible if we all did this?

Dr. Ian Mauro is a Professor and Filmmaker at the University of Winnipeg. To mark Suzuki’s 80th, today he released the video A Conversation with David Suzuki, which is available below: