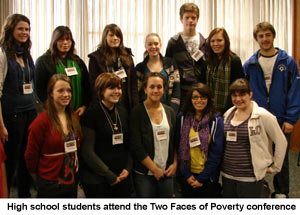 WINNIPEG, MB – More than 200 participants will gather at The University of Winnipeg for a two-day conference next week devoted to advancing the legal and human rights of people living in poverty here at home and around the globe. Two Faces of Poverty: Making the Law Work for Indigenous Peoples and Women is hosted by UWinnipeg’s Global College and takes place November 3 and November 4, 2008. The conference pulls together a unique and diverse mix of respected international speakers, local community leaders and activists, youth from more than 10 Manitoba high schools including The University of Winnipeg Collegiate and Model School, Aboriginal scholars, university faculty and students.

Four billion people – the majority of the world’s people – are excluded from the rule of law. That means half the people in urban areas worldwide live in squatter settlements and work in the informal economy. In Manitoba, poverty persists disproportionably for some people: 1 in 5 women are poor and that increases sharply for single mothers, 50.9% of whom are living in poverty. As well, 39% of Aboriginal people live in poverty.*

Focus: Legal Empowerment of the Poor

The Winnipeg conference builds on the June 2008 United Nation’s Commission on Legal Empowerment of the Poor report http://www.undp.org/legalempowerment/. Dr. Lloyd Axworthy, UWinnipeg President and Vice-Chancellor, is the only Canadian serving on the Commission, which is mobilizing to make legal empowerment a key pillar of the anti-poverty movement.

“The Commission’s work is from the grassroots up, with consultations held in 22 developing countries last year,” said Axworthy. “What makes this effort stand apart is that our goal is not to dispense aid, but to help people lift themselves out of poverty by working for policy reforms which will expand people’s legal rights and protections.”

Among the people traveling to Winnipeg next week are internationally known keynote speakers: Victoria Tauli-Corpuz (President, UN Permanent Forum on Indigenous Issues), Ashraf Ghani (Former Finance Minister of Afghanistan), Naresh Singh (Executive Director of the Commission on Legal Empowerment of the Poor) and Bev Jacobs (President, Native Women’s Association of Canada). They will join respected community leaders and youth in creating tangible ways to strengthen the right of people living in poverty.

“Although the UN report was more general, this Winnipeg conference will focus on two faces of poverty: Indigenous peoples and women,” said Dr. Marilou McPhedran, Principal of Global College. ”After being briefed on the Commission findings, participants will explore two main questions over two days of provocative presentations and workshops: What are the implications for international development education and practice? And what does this mean locally in terms of strengthening the rights of those who are most vulnerable to poverty in our community?”

The November 3rd and 4th Winnipeg conference is full with a waiting list. A detailed agenda and other conference information is available at http://twofacesofpoverty.uwinnipeg.ca/.

Journalists interested in attending keynote addresses and workshops or interviewing speakers and conference participants should contact Diane Poulin at 988-7135 to arrange.