This article was originally published in the commemorative 2017 UWinnipeg Magazine. 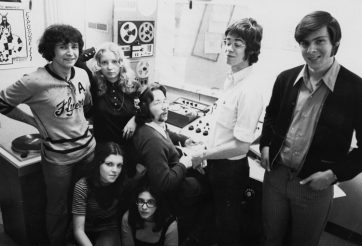 UWinnipeg students learning in the out-of-classroom atmosphere at CKUW in 1973, ©UWinnipeg Archives.

Launched in 1963, UWinnipeg’s on-campus radio station has a rich history of offering students and the community a unique opportunity to express ideas and discover new music heard nowhere else on Winnipeg’s airwaves. The programming at CKUW is created by over 100 volunteers — from current students to alumni and local community members.

“I remember people, mostly boys, hanging out in a lounge drinking coffee and playing cards,” she recalled.  “I had heard the music on the speakers in the basement near my locker and thought it was cool. I remember seeing something about volunteering with the station and got the courage to open the door and walk in. At the time, there were not many girls involved in the station but I wanted to give it a try, and I’m glad I did.”

In 1992, CKUW was still closed circuit when Firlotte became the first female station manager. “I felt we needed to be more focused on making it to FM,” she said. “By the end of my year, we were making strides.” In 1999, CKUW had made the big leap to FM, thanks in part to Firlotte’s efforts.

Today, the station operates 24/7 and represents a wide variety of music genres with a focus on the vibrant local scene. CKUW is a reflection of the community that creates its programs, holding a mandate to present music and viewpoints that are unique. The station broadcasts 120 hours of original programming weekly, and has an average listenership of more than 20,000 people.

CKUW is presently seeking to build and move to new studios on the first floor of UWinnipeg’s main campus. The station has recently launched a campaign called Raise the Volume in support of this initiative. “It would amount to a transformative shift,” said Firlotte. “This bigger, more accessible, and visible space is key for CKUW to reach even greater potential!”

CKUW can be heard at 95.9 FM. It can also be heard online at ckuw.ca, along with access to archives of past programs. To support the “Raise the Volume“ campaign, please visit ckuw.ca/donate or contact CKUW Director of Donor Relations, Ted Turner at rtv@cku.ca for more information.