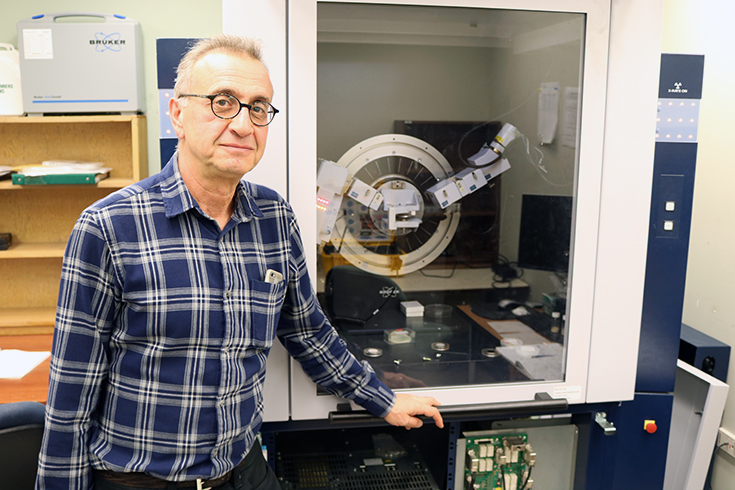 Some out-of-this-world research is happening at The University of Winnipeg’s Centre for Terrestrial and Planetary Exploration (C-TAPE).

“By determining the composition of both gases and dust in the atmosphere, we hope to learn whether Mars was habitable in the past and whether life, past or present, still exists on the planet,” he explained. “What NOMAD can do complements what we can do on the surface with rovers and landers. In preparation for this, we are using our Mars environment chamber facility at The University of Winnipeg to examine the light-reflecting properties of minerals indicative of biology and habitability so that we will be in a better position to analyze data from the NOMAD instrument.” 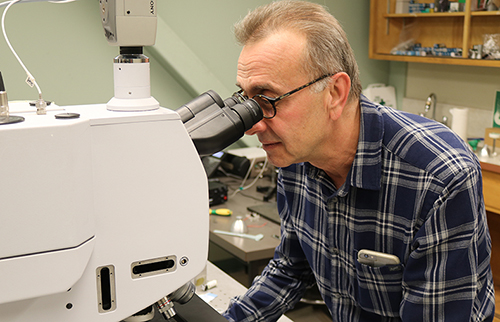 The Fourier transform infrared spectrometer is used to study the composition of rocks, minerals, meteorites, and other planetary materials at very fine scales, so the Centre can analyze a sample at the scale of single mineral grains. ©UWinnipeg

This work and funding is precisely the reason C-TAPE, which was established this past March, exists. Cloutis said UWinnipeg is now a known “player in the space game.”

“When I talk to colleagues in Japan, China, Europe, and the United States, they know us as a credible player in planetary exploration,” he said. “We have a terrific reputation, so we don’t have to hunt very hard for opportunities — they come to us.”

Those opportunities, which have included exploring asteroids, the Moon, and Mars, are usually with NASA and the ESA — and they are all assigned to undergraduate students working for him.

Because they support a lot of planetary missions whenever they can, there are many spur-of-the-moment opportunities. Just last week, NASA asked Cloutis for four students to help test camera systems on the next Mars rover in San Diego.

“Right now, one of the cameras going onto the rover is going through all this testing,” Cloutis explained. “So they need a lot of people to test the system in this chamber that simulates the surface of Mars.

C-TAPE has also been involved in missions exploring the Moon. The team is currently working towards launching a cube sat, which is a satellite half the size of a shoe box, to the Moon with the ESA.

This unique satellite is designed to see if there are ice deposits in some of the shadowed craters at the moon’s north and south poles.

“There’s a real interest from NASA and the ESA about trying to find resources on the Moon, so you don’t have to haul up water and oxygen from earth,” Cloutis said. “If you can produce it on the Moon, that makes the whole voyage easier.”

Despite all the amazing projects on the go already, Cloutis said this as just the start for the Centre. With space exploration still growing, the possibilities are endless.

“Since space exploration is a growing field, with more nations getting involved, I see C-TAPE as having a bright future, expanding our range of activities and missions, and engaging even more University of Winnipeg students from a number of different departments.”