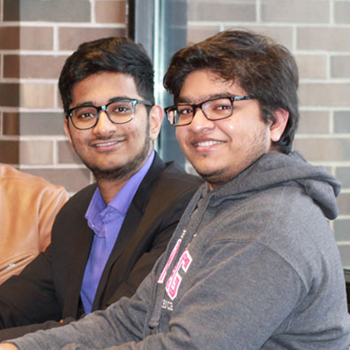 The UWCPC organized the inaugural UWinnipeg Programming Contest (UWPC 2020) that was held online exclusively for UWinnipeg students on the competitive programming platform Hackerrank earlier this month. Most of the contest’s problems were designed and curated by the Patels (who are not related).

“Aalekh and Harsh have shown great initiative to get this competition up and running,” said UWinnipeg’s applied computer scientist Dr. Christopher Henry. “I highly recommend students compete in at least one competition before they graduate.”

When Aalekh was a first-year student who yearned for competitive programming coaching, opportunities were limited. That was among his inspirations for organizing the competition. He saw this as a motivator for his fellow applied computer science, math, and physics colleagues.

“This programming contest was created by the students and for the students,” said Aalekh. “Problems from contests like these are often presented in coding interviews in tech firms. We tried to give our colleagues the experience and exposure to interview-like problems that they may face after graduation in tech firms, like Sightline Innovation (local), Bold Commerce (local), Facebook, and Amazon.”

The main goal of the UWPC 2020, Aalekh notes, was not to test students of their problem solving capabilities but rather get them excited about it.

“These contests let students explore a unique side of computer programming, which involves a lot more mathematical thinking, and stretching their problem-solving abilities,” said Harsh. “You’re required to solve the most number of programming problems in a limited amount of time, which demands you to be faster and more focused. Getting your code to work is not where you finish, but it’s where you start.”

The four-hour contest comprised of 12 problems had 15 participants. A variety of languages were used including C#, C++, Java, and Python. This contest also helped them prepare for other contests like ACM ICPC and IEEEXtreme, among others.
“Programming competitions are great events,” said Henry. “They show students different (often abstract) ways to apply their knowledge, they help students make contacts and friendships that will last beyond university, and employers like to see participation in these events. Most importantly, they are a lot of fun.” 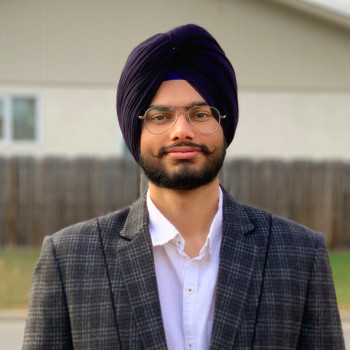 The top performers include Jaskirat Singh Grewal, who came in first place, with Nirmal Patel and Collin Chartrand taking second and third place, respectively.
Grewal, in the final year of his Bachelor of Science, Applied Computer Science (Honors), and Mathematics, enjoys creative and logical thinking, which is why programming contests interest him.
“I always try to think differently and look for different ways to solve a single problem,” said Grewal. His advice for future programmers includes, “‘Try to break a big problem into small chunks.’ Even other than programming, whatever you do, make it your own and do it with a passion. Nothing is easy or difficult, it all depends on how you think.”
Nirmal, in his second year at UWinnipeg, began coding with his instructor Jeanette Bautista. She taught him to write computer programming starting with Hello World!, as well as data structure and algorithms. “Big tech companies give more preference to students who are good at solving problems which is the reason why competitive programming is popular,” he said.

“The only real way to get better at something is to practice and to push your limits,” said Chartrand, who is in his second year of a Bachelor of Science, Mathematics. “This is especially true with coding. The more we challenge ourselves the better we’re going to get. I believe that competitions like this will help me become a better programmer and I also just love a little friendly competition.”

In the future, UWCPC plans to coach interested students for competitive programming and host contests to help them practise. They also plan to extend invitations to students from University of Manitoba to build a strong Competitive Programming community in the province.